Tool of the week: Geofeedia

What is it? A tool that allows you to search for a location and find geolocated tweets, photos and videos.

How is it of use to journalists? This tool offers potential for journalists faced with verifying a breaking news story. Search for a postcode, country, school or sporting stadium and you can see geolocated social media content posted on Twitter, Instagram, Picasa, Flickr and YouTube.

Imagine hearing reports of a fire. With Geofeedia you could enter the address and see what images, videos and tweets are being shared on social media. 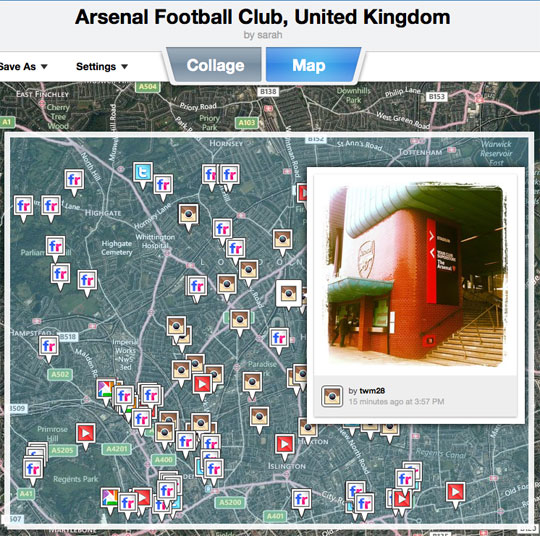 Hat tip: Poynter, which has reported that Geofeedia came out of private beta earlier this week.

Find out more about verification by reading this Journalism.co.uk guide.

The site, which allows users to drag and drop elements such as tweets, audioboo recordings, photographs from Flickr and YouTube videos to tell a dynamic story, which can then be embedded on a news website or blog, was previously in private beta and an invitation was required. As of this week Storify is now in public beta.

Since its launch in September, private beta users have created more than 21,000 stories, according to this post.

Storify stories have been viewed more than 13 million times, 4.2 million views were in March. The stories generated have been embedded on more than 5,000 sites, including news sites from the New York Times, to the Guardian and BBC.

Here are five stories to inspire you to have a go:

1. The Stream, the daily television show powered by social media and citizen journalism on Al Jazeera English, has created this Storify story on Blogging from “Between the Bars”.

[View the story Blogging from “Between the Bars” on Storify]

4. BBC London curated the London marathon with Storify.
[View the story Your Story of Marathon 2011 on Storify]

5. And whether you love of hate the hype, the Royal Wedding will no doubt inspire more Storify stories, such as this one from ABC News.
[View the story UK gears up for royal wedding on Storify]

Do you have any useful tips for people using Storify? Please share them with Journalism.co.uk readers.

The photo-sharing website Flickr has introduced a new option which allows photographers to publicly nominate their images for licensing by Getty.

When another user sees an image they would like to licence, they will be put in touch with Getty to arrange the sale.

In short, the new Flickr/Getty feature, called Request to License, lets photographers nominate their photos directly to users searching for photos to license – without first going through Getty.

Cnet News has a report with a bit of context here:

In Flickr’s initial partnership with photo licensing powerhouse Getty Images, Getty representatives cherry-picked Flickr photos and photographers they liked. Later, Flickr members could offer their own candidates for evaluation by Getty for licensing.

When a prospective licensee sees an image marked for license, they can click on the link and be put in touch with a representative from Getty Images who will help handle details like permissions, releases and pricing. Once reviewed, the Getty Images editors will send you a FlickrMail to request to license your work, either for commercial or editorial usage. The decision to license is always yours.

The Independent newspaper has apologised, “after it was accused of breach of copyright for publishing a Flickr stream of images which included at least one ‘All Rights Reserved’ photo of the snow,” reports the British Journal of Photography.

(The photographer, Peter Zabulis, who challenged the Independent has more detail at this link)

Mail Online is coming under renewed criticism for its use of online images, following a story on ‘moneyfacing’ (people using banknotes to create self-portraits).

A tweet from @alisongow alerted us to the Mail’s article ‘Creasing up: Banking on a funny photo with the ‘moneyfacing’ craze sweeping the web’ on which commenters have alleged the paper has used the images central to the story without permission.

“As the photographs are a pretty intrinsic part of this so called feature, I’d say that asking permission to use them is the very least this so-called newspaper should’ve done.”

The creator of the images, Thom Shannon, has now reposted them to Flickr with a watermark protecting them, adding he has never felt the need to use watermarks before, but that requests to the Daily Mail to remove the photos have not been answered.

The Mail isn’t the only site making use of the images: the Sun has a 12-image slideshow and Telegraph.co.uk features just one image, though it does give accreditation for this to a website (something Shannon has disputed).

This is not the first time the Mail’s use of online images has been challenged, but issues of copyright aside, Kevin Anderson suggests that there is a bigger opportunity being missed by newspapers at large (scroll down to the comments):

“[T]his is another example of the news industry missing an opportunity to build community around what they do. When I use Creative Commons photos from sites like Flickr, firstly, I honour the terms of the licence. Secondly, I drop the Flickr user a note letting them know that I’ve used a photo on our site. It’s not only a way to use nice photos, but it’s also a way to build goodwill to what we’re doing and do a little soft touch promotion of our coverage. It takes a minutes out of my day to create that email, but instead of a backlash, I often get a thank you. They let their friends know that the Guardian has used their picture. It’s brilliant for everyone. There are benefits to being good neighbours online, rather than viewing the internet as a vast repository of free content.”

(Via Cybersoc) National Public Radio is calling on its Flickr followers to identify individuals in a series of photos from a US senate meeting.

The idea reminded Journalism.co.uk of regional newspaper-style calls for information about old photos of sports teams etc in print. A clever way to get your community to help you out using a free tool too.

Maybe not an unlikely crime, but its one that could be increasingly common as more newspapers turn to Flickr for content.

Andy Piper writes on his blog:

“The Daily Mail posted a story on their website about my friend Andy Stanford-Clark, and used a crop from one of my photos to illustrate it. As it happens, I would have been perfectly happy for them to use it (and even to crop it) if they’d asked for permission. At the time I post this, they are not following the Creative Commons BY-NC-ND licence…”

“….it’s a national newspaper displaying what would appear to be significant ignorance about the morality of using user-created content.”

They don’t make ’em like Kyle Macrae, the founder of citizen journalism photography site Scoopt, any more – but maybe they should?

Speaking at Friday’s journalism and enterprise ‘unconference’, JEEcamp, Macrae posited that the only option for journalists at the moment is to be entreprenuerial.

Macrae sold Scoopt to Getty Images in March 2007, before the photography giant shuttered the site in February this year.

Macrae outlined some of the issues with the idea behind Scoopt:

It was impossible to scale the business on a regional level

But, says, Macrae, selling the site was always his ‘exit strategy’ – something all entrepreneurs should have from the start and there were some very valuable nuggets of advice for budding independents in his presentation:

A Flickr image of Birmingham’s city skyline was mistakenly used as a backdrop for a BBC news bulletin, the corporation has said, offering £75 usage fee to the photographer.

After speaking with Matthieu Stefani from cit-j platform Citizenside about how the site mobilises its users to cover local news events, a Flickr development came to mind as a useful tool for tracking/aggregating content around breaking news.

Using Flickr’s map function, you can search by keyword and location. A quick search for bushfire and Australia, for example, brings up a host of images from Flickr users: Flickr announced last week that it has passed the 100 million mark for geotagged images and the site has also introduced a feature, as part of the geotagging process, called ‘nearby’, which allows users to search for other geotagged images located with a 1km radius of their photo.