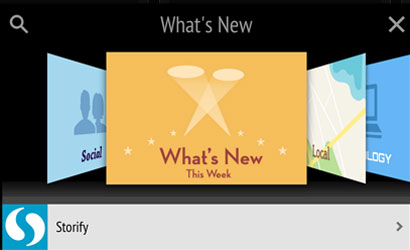 The move marks Storify’s first syndication deal and sees curated stories by Storify users such as Al Jazeera’s the Stream, the Washington Post and the White House communications team available on the social newsreader app.

Pulse, which is available for the iPad, iPhone, Android, Kindle Fire and Nook, allows readers to chose to add their favourite news providers and feeds giving a personalised reading experience.

A Storified blog post by the company explains how to add your Storify creations to your personalised Pulse app.

You can also see your stories – or any account’s stories – on Pulse by subscribing to the RSS feed at the top of Storify profile pages. Then call the feeds up from Google Reader on Pulse. You’ll be able to see all those accounts’ stories on Pulse from then on.

For more on the syndication deal see this Storify.

The site, which allows users to drag and drop elements such as tweets, audioboo recordings, photographs from Flickr and YouTube videos to tell a dynamic story, which can then be embedded on a news website or blog, was previously in private beta and an invitation was required. As of this week Storify is now in public beta.

Since its launch in September, private beta users have created more than 21,000 stories, according to this post.

Storify stories have been viewed more than 13 million times, 4.2 million views were in March. The stories generated have been embedded on more than 5,000 sites, including news sites from the New York Times, to the Guardian and BBC.

Here are five stories to inspire you to have a go:

1. The Stream, the daily television show powered by social media and citizen journalism on Al Jazeera English, has created this Storify story on Blogging from “Between the Bars”.

[View the story Blogging from “Between the Bars” on Storify]

4. BBC London curated the London marathon with Storify.
[View the story Your Story of Marathon 2011 on Storify]

5. And whether you love of hate the hype, the Royal Wedding will no doubt inspire more Storify stories, such as this one from ABC News.
[View the story UK gears up for royal wedding on Storify]

Do you have any useful tips for people using Storify? Please share them with Journalism.co.uk readers.

Al Jazeera English will soon be launching a new television show called The Stream which will closely integrate online communities and the news by harnessing social networking in both the sourcing and reporting of stories, according to a report from Wired.

During the course of the show, they’ll read tweets and updates (and display them on-screen) as they come up. They’re also planning on interviewing guests via Skype — connection quality issues be damned. In a screen test we saw at the Wired offices recently, the hosts bantered with each other and with in-studio guests, but also responded to viewers’ @ replies, played YouTube videos, and Skyped with social media mavens around the world. The studio was liberally sprinkled with monitors, and the show frequently cut to fullscreen tweets while the hosts read the 140-character updates out loud, hash tags and all.

According to this Twitter account, The Stream, understood to be due for launch in May, will be “a web community and daily television show powered by social media and citizen journalism”.

Outlining the plan on Facebook AJEstream says it will initially cover about five stories a day, based on the work of journalists and producers trawling the web and also by using an element of crowdsourcing opinion online on what topics interest people the most.