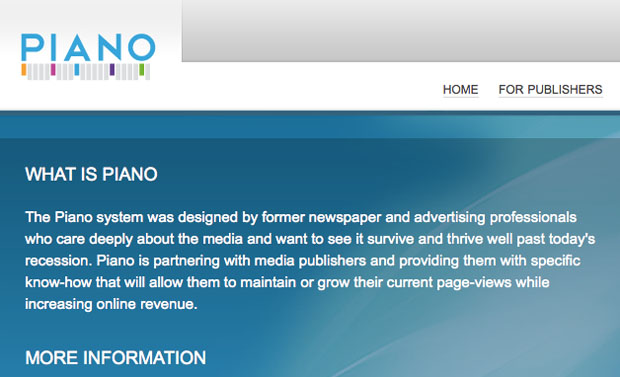 Bloomberg reported late on Wednesday (28 September) that News Corporation’s iPad-only newspaper the Daily has been averaging around 120,000 readers a week, said to be “less than a quarter of the number the company said it needs to make money”.

The figures came from advertising executive working with the publication.

News Corp., whose Chief Executive Officer Rupert Murdoch personally introduced the publication about eight months ago, may have even fewer paying subscribers since people can read the Daily free for two weeks. The 120,000 figure is for so-called unique weekly visitors, which includes people who pay and those who don’t, said John Nitti, executive vice president of Publicis Groupe SA (PUB)’s media-buying division Zenith Optimedia.

Bloomberg adds that Murdoch had said in February the publication, which was launched in February, would need 500,000 subscribers “to break even”.

Reuters reported this week that digital publishing company Yudu has launched a service which means magazine publishers can evade the 30 per cent cut which Apple takes when subscriptions are charged through the App Store.

Yudu, whose online publishing tools help companies tailor their content for tablet computers, smartphones and ereaders such as the Amazon Kindle, said Apple had recognized its new service as compliant with its terms and conditions.

… The new dual-subscriptions system from Yudu, whose customers include Reader’s Digest and Haymarket, allows users to download publications onto their Apple device through the App Store, even when the purchase is made directly from the publisher.

Yesterday the Telegraph announced the launch of a new iPad app which appeared to follow Apple’s new rules, which state that while publishers are allowed to make a subscription offer outside of the app, the same (or better) offer must also be made available inside the app, through which Apple will take a 30 per cent cut.

A total of 79,000 people have subscribed to read the Times and Sunday Times online, on the iPad and on the Kindle, according to figures released by owner News International yesterday. The number represents an increase of 29,000 over the previous five months.

News International has not released a breakdown of digital subscribers into those reading online, via the iPad or via the Kindle, but reported that total sales of digital products stood at 222,000 at the end of February, up from 105,000 on 31 October.

Rebekah Brooks, chief executive of News International said that the figures represent that “ever larger numbers of people are willing to pay for quality journalism across a variety of digital formats”.

She added: “Our industry is being redefined by technology and we will no longer measure the sales and success of our newspapers in print circulation terms alone.”

paidContent UK is reporting that the Mail Online is due to launch on the iPad next week. According to the article, Mail Online publisher A&N Media aims to grow digital to represent a quarter of its revenue by 2016 “by adding a range of new subscription options and tilting away from advertising alone”.

A&N won’t get there by wedding itself to paid content, however. “We’ve not adopted any ideological beliefs in terms of paid versus free and remain open,” [A&N CEO Kevin] Beatty said. “Mail Online newspapers’ iPad edition is released next week … with our iPad edition, we’ll be trialling both paid and free models.”

The publisher has previously said the Mail Online website will remain free whilst it pitches its growing audience scale to advertisers.

According to the latest figures from the Audit Bureau of Circulations, Mail Online has almost 51 million monthly unique visitors, (February 2011). The latest results represented the site’s first month-on-month fall in traffic for more than a year, after reaching just over 56 million in the slightly longer month of January.

Earlier this month it was alleged that Apple had told a number of European newspapers that soon they would not be able to offer print subscribers free access to iPad editions through the App Store.

According to this report by Apple Insider, Apple is keen to make the change to prevent publishers cutting it out of the 30 per cent fee it requires.

The story developed this week as reports such as this one by the Financial Times claimed that Apple had told book publishers customers could be given the ability to purchase books outside of an app as long as the same option is also available to customers from via an in-app purchase.

It’s not yet been confirmed whether this will apply to news media apps as well, although some reports are claiming it will.

Last week the International Newsmedia Marketing Association announced that it will hold an invitation-only roundtable on tablet subscriptions at the Park Inn Hotel at Heathrow Airport on 17 February, claiming that “Apple is changing the rules”. The roundtable will analyse Apple’s new plan, discuss ways to work with it and look at alternative subscription models.

Today paidContent reported that publishers in Belgium and France are taking the matter to the authorities, “making requests that Apple be investigated by antitrust watchdogs”.

Apple has not responded to requests for comment but paidContent points out that the situation may be made clearer later today when Apple’s VP of internet services Eddy Cue joins Rupert Murdoch to launch News Corp’s new iPad newspaper, the Daily.

A survey by the Reynolds Journalism Institute of more than 1,600 iPad users has found that more than half of print newspaper subscribers who spend around an hour a day reading news on the iPad are “very likely” to cancel their print subscriptions within six months.

paidContent reports on what these figures could mean for news publishers.

…as the NYTCo (NYSE: NYT) prepares to put its digital content, including its revamped iPad app, behind the metered paywall next year, and companies like Gannett (NYSE: GCI) debate whether to keep its USA Today app free, the study shows how far publishers might be able to go in terms of getting readers to pay more for their content.

The Reynolds survey is the first phase of a multi-year research project to understand how Apple iPad users consume news content.

This week it was reported that Amazon is looking to open up newspaper and magazine subscriptions bought for the Kindle onto any digital platform that runs Kindle apps.

Reporting on the news, Editors Weblog and paidContent question whether this will appeal to news publishers already managing or planning their own subscription models across platforms such as the iPad and iPhone. Summing up Editors Weblog says:

The new feature may not be the best idea for those already selling their own multi-platform subscriptions or who want to control their brands on other devices. The Wall Street Journal will not partake in the digital content exchange, and The New York Times has been less than forthright about its plans for being included, saying “We’ll be announcing our bundle details when we launch the details of our paid model.”

Financial Times publisher Pearson has reported an increase of 11 per cent in overall sales for its newspaper operation for the first nine months of 2010, according to a Press Association report.

The FT Group, which according to a report by the FT makes up 15 per cent of turnover, also saw digital subscriptions to its content rise by 50 per cent in the first nine months of 2010 to more than 180,000.