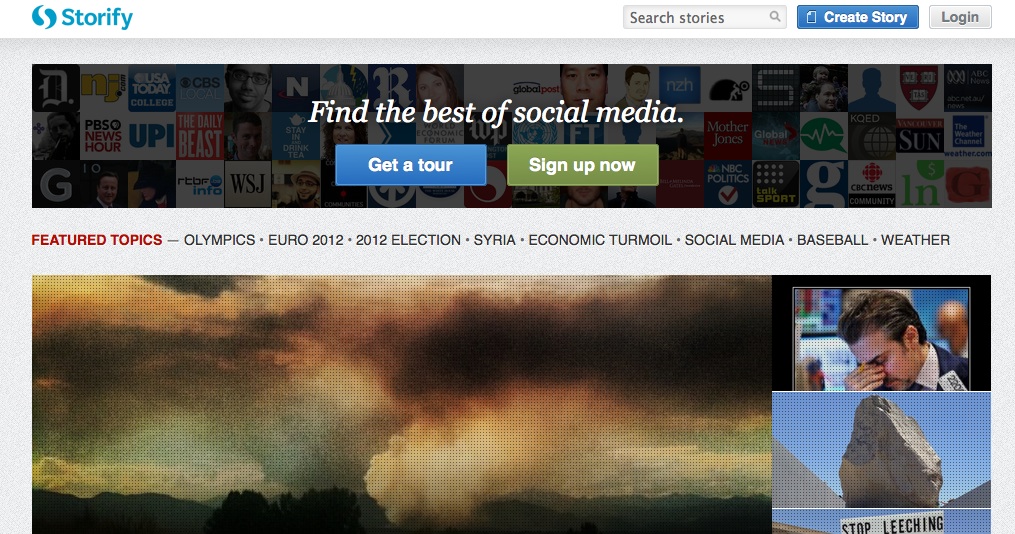 Google launched its “living stories” project in December with collaborations with the New York Times and Washington Post:

The Living Stories project is an experiment in presenting news, one designed specifically for the online environment (…) Complete coverage of an on-going story is gathered together and prioritised on one URL.

Having made the format open source in February, Google has now created a plugin for blogging platform WordPress to help publishers create their own “living stories” more easily.

(Hat tip to Andy Dickinson, who posted about the WordPress plugin at this link.)

“The three go together,” says Hanson Hosein, the director of the Masters of Communication in Digital Media program and a former NBC News correspondent who covered the Iraq war as a one-man band. “We’re hearing from our applicants that there’s nothing else like our program.”

Why does search have to produce the same set of results that we always get?

One of Andrew Lyons’, commercial director of Ultraknowledge (UKn), opening questions at the Digital Storytelling conference last week as he talked delegates through UKn’s work with the Independent.

The Independent’s NewsWall, launched in January, is a new way of organising stories and navigating through them. It provides a “visual documentation” of a topic and what’s happened in that subject area. (Similar efforts are being made by Daylife’s technology and the Guardian’s News Zeitgeist.

When searched, the wall will return 30 picture-led stories as results, and figures for dwell time on the wall are proving interesting, said Lyons.

The next part will be the ability to save my search for a topic to my Facebook page and then only have it update when it’s relevant to me.

UKn can now start to produce sponsored NewsWalls around events such as the forthcoming World Cup or general election. It will also be opening up the archive of content available through the Independent’s NewsWall from two years to the full 23 years of its history. UKn has already worked with other publishers to create more intelligent and visually organised search results pages, such as those produced by an initial search on Metro.co.uk. Sometimes the story that you’re after isn’t on your beat, so how do you find it. But when you’re dealing with news its changing, fast – how do you SEO for this? How do you tag it and relate it to what’s happened in the past and what’s happening in the future? (…) We want to be an innovation lab for publishers.

[Disclaimer: Blinked.TV was a sponsor of Journalism.co.uk’s news:rewired conference in January]

The app, which will soon be available for iPhone users, lest you record and stream audio and video, and send text updates. Users can create channels archiving this multimedia content and different permissions, which can be embedded in their sites. Users can also switch between broadcast, audio and text modes without losing connection to a server during the stream, said co-founder Andrew Cadman.

The app’s interface is illustrated in this roughly-shot video below:

According to founder Andrew Cadman the app allows for “digital storytelling with a single broadcast” – an important part of this is the metadata attached to each piece of material. By itself a broadcast won’t tell a story, said Cadman, but with captions and location data attached to it, it can. The app also allows for multiple users to contribute to the same channel from different handsets and locations.

Providing high-quality livestreaming is the company’s ultimate aim – current 95 per cent of content uploaded via the Blinked.TV site is streamed live, said Cadman. Blinked.TV will also be trialled by a big UK media group in the next few months and is looking a charging larger companies for use of its embedded channels or charging on a bandwidth use basis.

As part of the Digital Storytelling event, Blinked.TV is running a competition offering prizes of £350 for the best individual and best team broadcast produced using the application. The deadline for entries, which will be judged by Blinked and digital journalism collaborative not on the wires, who organised the event, is 3 May.

Journalism.co.uk is attending today’s Digital Storytelling conference – a free one-day event looking a new tools and techniques for multimedia and online journalism. If you’re interested in following the day, use the liveblog below or follow the hashtag #ds10 on Twitter. You can also watch live coverage using the video player below.

We’ll try to share the best bits of the day on the site.

not on the wires – the new digital journalism initiative Journalism.co.uk reported on last month – has gone live with a new website.

The group of journalists, which ran an innovative, multimedia project in November covering the anniversary of the fall of the Berlin Wall, will offer specialist training courses and is planning a ‘digital storytelling’ conference.

“We all work in different areas. It’s that whole sense that we’re entrepreneurial journalists – we’ve all got offshoots of the work we do, whether that’s web development or social media consulting,” Wood said of the Berlin Project in an interview in November.