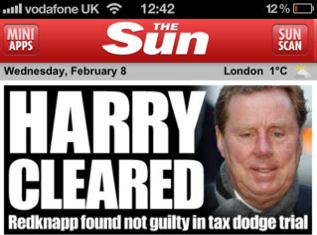 A new iPhone application from the Sun has become the most downloaded paid-for news app on the iTunes store this week – in its first week on the market.

The Sun app is currently sitting at number 10 in the overall league table of paid-for applications and is number one in the news category, with the Daily Mash in second.

It is the latest in a range of applications being launched by News International for its daily national titles. The Sun launched an Android application last month and the Times unveiled a web app earlier this week. Football news and forum site Football365 has posted an open letter to the Sun, criticising the paper’s back page lead yesterday on England manager Fabio Capello.

Our fear is that this campaign is being waged not because the tabloid press truly believe that Capello is in the wrong (…) but largely out of spite because they didn’t get their way after the summer and he stayed on.

The site is of course part of the 365 Media Group, which is owned by BSkyB, part of the Murdoch empire that also includes the Sun.

A fantastic spot from Michael Acton Smith after the Sun’s criticism of PM Gordon Brown this week for misspelling the name of killed Guardsman Jamie Janes in a letter to his mother, which included the paper publishing a transcript of a phonecall between Brown and Jacqui Janes.

(Hat tip to @joe on Twitter for sharing the link)

Publisher of the Chicago Sun-Times has filed for bankruptcy protection following in the footsteps of its rival, Tribune Co, which filed last December.

The new audio service will make use of new multimedia studios at News International’s Wapping headquarters.

Guardian.co.uk was named website of the year at last night’s British Press Awards, as the paper picked up three awards.

The Financial Times also scooped three awards winning the newspaper of the year title and prizes for two of its journalists.

The Sun walked away with most prizes on the night with four: scoop of the year and reporter of the year for Tom Newton Dunn; and its ‘Help for Heroes campaign’ named campaign of the year and winning the Cudlipp award.

Press Gazette has the full list of award winners.