More than one in 10 Google UK search results includes at least one journalist photo and bio byline, according to a study by search and social analytics company Searchmetrics.

The study looked at the top 100 search results from 1 million keywords and found that 13 per cent included journalist bios and pictures for the author of articles.

Getting a photo and bio displayed in search results requires a journalist to have a Google+ account and their profile to be linked with news stories (instructions on how to do this are here).

UK writers in the top 20 include Charles Arthur, the Guardian’s technology editor, and Edward Chester, reviews editor at TrustedReviews.com.

US journalists dominate the top 20, “meaning UK journalists and publications are missing out on increased visibility, traffic and potential advertising revenue”, according to a release from Searchmetrics.

The author profile feature, known as authorship markup, is something that Google has been rolling out since the end of last year. It includes author profile information with a thumbnail image and links.

Journalists and bloggers who write about technology, medical and food topics are among those that are most visible in author profile integrations according to the study by search and social analytics company, Searchmetrics, which analysed Google UK search results relating to one million popular keywords.

Marcus Tober, founder and chief technology officer of Searchmetrics said in a statement:

It was surprising to see more than one in ten of the results tested are showing author integrations because this is still a new feature – it’s much higher than I expected.

The Financial Times has the largest number of followers on Google+, while the Daily Mail and Telegraph websites get the most Google +1 recommendations from readers, according to a release from analytics software firm Searchmetrics.

Searchmetrics has looked at the Google+ presence of 13 national newspapers which have “a combined total of 544,545 followers”.

This compares with a total of 1,284,674 followers (fans) on Facebook, currently the world’s biggest social network, for which all 13 newspaper sites maintain official pages.

The social network, which was launched nine months ago, has more that 100 million user accounts, according to Google.

At the time of the Searchmetrics study, which was carried out on 19 March:

In the release Searchmetrics points out that the Times, the Sun, Daily Express and Daily Star have not created a Google+ page for their news sites.

Searchmetrics found stories and content from the Daily Mail website received the most recommendations from people using the +1 button, with approximately 10,493 +1s a week on average.

While the Financial Times has the most followers it averages around 670 +1s a week, probably due to its metered paywall.

The most frequently +1’d article on Daily Mail site was “a story (with images) about how the majority of runway models meet the Body Mass Index (BMI) criteria for anorexia”. It had been +1’d 837 times.

This contrasts with the Mail’s most “liked” story of 2011, which saw more than 62,458 people click the Facebook like button. This story was headlined “the 9/11 rescue dogs: Portraits of the last surviving animals who scoured Ground Zero one decade on”. See our story on the top 10 Facebook stories of 2011 (we used Searchmetrics to gather the data).

Marcus Tober, Searchmetrics’ CTO and founder said in the release:

Google+ is still a relatively young social network but Google is very positive about its future and we’re already seeing a large number of people on the site, so it’s important for newspapers and other big brands to get in early and have a strong presence on the network.

Tool of the week: Searchmetrics Essentials

What is it? A tool to test your news site’s SEO and social rankings

How is it of use to journalists? Searchmetrics is a paid-for tool to allow you to see your site’s SEO and social rankings.

Full access costs around £150 per month but you can now have limited access for free with last week’s release of Searchmetrics Essentials. 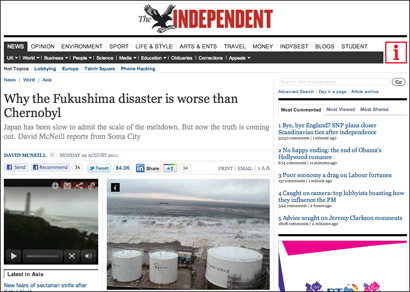 A liveblog makes it in at number two, plus there are photo stories and a news game (see number four).

1. Independent: Why the Fukushima disaster is worse than Chernobyl = 83,529

8. Mail: Back from the dead: Astonishing pictures show how Japan is recovering just three months after tsunami = 31,750

Data was gathered using Searchmetrics and downloaded for analysis on 6 December. The news outlets included were: BBC, Guardian, Telegraph, Independent, Mail Online, the Sun, the Mirror. You can see the downloaded Twitter data here. 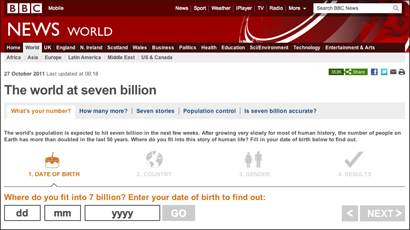 As with the US list, stories range from hard news to quirky (or “cute”, as Facebook describes them). Interestingly, the two top stories are newsgames, where the reader is invited to participate using gaming mechanics. (It’s worth mentioning here that there will be a session on newsgames and gaming mechanics at our news:rewired conference for journalists, for which the agenda is here.) The list also includes online video (another news:rewired topic).

The top 10 most shared, commented and liked Facebook news articles of 2011:

9. Mail Online: Robber who broke into hair salon is beaten by its black-belt owner and kept as a sex slave for three days… fed only Viagra = 145,413

2. Mail Online: The 9/11 rescue dogs: Portraits of the last surviving animals who scoured Ground Zero one decade on = 62,458

8. Mail Online: Robber who broke into hair salon is beaten by its black-belt owner and kept as a sex slave for three days… fed only Viagra = 42799

7. Mail Online: Robber who broke into hair salon is beaten by its black-belt owner and kept as a sex slave for three days… fed only Viagra = 71,514

Data was gathered using Searchmetrics and downloaded for analysis on 6 December. The news outlets included were: BBC, Guardian, Telegraph, Independent, Mail Online, the Sun, the Mirror. You can see the downloaded Facebook data here. 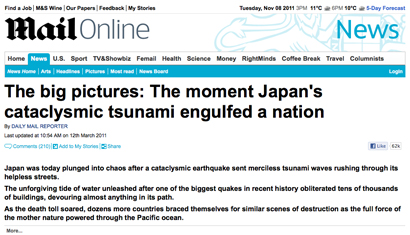 This Mail Online article was the most shared, the Searchmetrics study found

Fifteen times more links to Mail Online articles are shared worldwide via StumbleUpon than on Twitter, according to a study by Searchmetrics.

During the six month period analysed, just over half (50.78 per cent) of links to Mail Online articles were shared on StumbleUpon, with Facebook activity (likes, shares and comments) accounting for 45.87 per cent and links on Twitter just 3.21 per cent.

More than half (56.77 per cent) of the Guardian’s social links came from Facebook, with StumbleUpon accounting for 31.35 per cent and Twitter 10.98 per cent, according to the study.

In a release, Dr Horst Joepen, CEO of Searchmetrics said:

Some people we have shown this data to have been surprised at the volume of links generated for UK newspapers on the StumbleUpon social bookmarking site. This is a very popular site globally and the links could have been generated throughout the world from English speakers who use StumbleUpon.

3. Robber who broke into hair salon is beaten by its black-belt owner and kept as a sex slave for three days… fed only Viagra =

The Mail Online and the Guardian are the most visible UK newspaper websites on social networks such as Facebook, StumbleUpon and Twitter, according to a separate 10-week study by Searchmetrics, which analysed how often content from 12 leading newspaper sites was shared on six popular social networking and bookmarking sites.

Mail Online came out on top, with links to its pages being shared 2,908,779 times a week on average. The Guardian came second with an average 2,587,258 links being shared on social sites every week.

The Searchmetrics study monitored links shared on Facebook, Twitter, LinkedIn, StumbleUpon, Delicious and Google+ over a period of 10 weeks.

Social news – that is news and articles that are shared or recommended by your friends and followers on social sites – is potentially an important source of traffic for online news sites.

It’s worth noting that search engines, such as Google and Bing are starting to include popularity on social networks as a factor when judging the quality of web pages and how they should be ranked in search listings. So it’s important for news and other web sites to build and monitor visibility on social sites if they want to rank highly and attract visitors via search.

The data for the study was taken from the global social media database which Searchmetrics operates to power its online software tools.