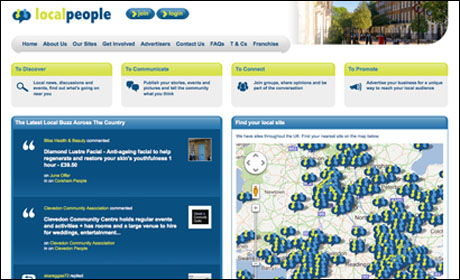 Reports emerged yesterday that Northcliffe Digital is to restructure its Local People websites, with an end to the contracts of the freelance “contracters” currently on each site.

Instead “dedicated community publishers” will be tasked with managing a group of the sites.

Here is the full statement from Northcliffe Digital:

The current publishing structure uses one freelance contractor per site. These contracts will expire in August.

This approach means Local People will have the benefit of more experienced publishers covering a broader remit and will streamline the running of the business.

Local People sites that sit outside Northcliffe’s footprint will be made available as franchises.

The Local People websites attracted 840,000 unique visitors in May 2012. There are no other immediate plans to make changes to the sites.

Could you sell your skills as a journalist to a potential employer in just 140 characters? Because that is exactly what one editor is asking of potential new recruits.

Alan Geere, editor-in-chief of the Essex Chronicle Media Group and editorial director of Northcliffe Media South East, says he is “fed up of wading through turgid ‘letters of application’ and monstrous CVs”, so instead he is inviting applications for the latest journalism role at the title via Twitter.

In a blog post, Geere vents his frustration at receiving CVs from people he considers to be “would-be journalists who were obviously asleep during the class on intro writing”.

So in a bid to change this he is insisting anyone interested in the latest roles available at the publisher to respond via Twitter to his account @alangeere, giving them just 140 characters to explain what they can do and why they should be considered.

It’s an interesting tactic and should hopefully spark some creativity from some entrants, but I do wonder how much you can learn about a person in 140 characters? The other question is about those who wish to keep their application a secret, especially from their current employer/colleagues. I would assume direct messages are the answer here, but will of course require Geere to follow any of those recruits before they can demonstrate their abilities.

See his full blog post here and feel free to leave your thoughts below.

The new managing director of Northcliffe Media, former Metro director Steve Auckland, is planning to launch a review of the division’s 115 regional newspapers, according to the MediaGuardian.

Last month Journalism.co.uk reported that parent company the Daily Mail and General Trust has ruled out buying or launching any more local newspapers, but said it was interested in any approaches for its regional newspaper division.

Today the Guardian reported that Auckland will carry out a “swift and radical review”, which could include reducing the number of days on which some of the loss-making titles publish and some newspaper closures.

“If you have got stacks of titles and lots of loss-makers and lots publishing six days a week and not making money you have got to look at the portfolio,” he said.

“I want a step change. It might be harsh but it gives a platform for the future. The key thing is a product portfolio review. We have to look at the number of titles and frequency of publishing.”

Full storu on Guardian.co.uk at this link

According to the group’s preliminary results published yesterday, Northcliffe recorded several declines in the year ending October 2010, with underlying revenues down £16 million (six per cent), reported revenues have dropped by 8 per cent and advertising revenues were also down by 7 per cent.

Presenting the results yesterday morning, CEO Martin Morgan told investment analysts that the group is “trying to give ourselves a good shot at capturing local information markets”, paidContent reports.

“We’re going to be taking the technology platform we’ve built (for LocalPeople) and merging it with the ThisIs sites,” Morgan told analysts. “So local people can concentrate on finding a garage, finding a plumber in such a way that provides a long tail of local advertisers – people who aren’t advertising in the local press, we think we can get them in.

Following the launch of its Local People network in July, paidContent:UK talks to Associated Northcliffe Digital’s Roland Bryan about developments with the sites and the group’s expectations for revenue.

The network’s success will be reviewed over the next 2-3 months, says Bryan, who is confident the sites will make money – a slice of the UK’s local ad market, which he values at £2.8 billion.

Despite not being set up as citizen journalism/user-generated news sites, Bryan says contributing news items has been popular with users with around 12 stories feeding back in Northcliffe’s local papers.

Regional newspaper publisher Northcliffe posted an 81 per cent drop in operating profits in the six months up to March 29 2009, according to figures released today.

Operating profits for the group, which publishes the Bristol Evening Post and Hull Daily Mail, fell by £33 million to £3.2 million over the period. Advertising revenues also fell by 31 per cent to £103 million.

The publisher has reduced operating costs, however, by 11 per cent compared to the last period – including a reduction of its headcount by 500.

On the digital front, revenues were reportedly in line with the same period last year. Unique ‘visitors’ to the network of ‘thisis’ sites rose by 42 per cent year-on-year to 4.2 million.

“Within our UK local media operations, revenues continue to be stable which is encouraging, when combined with increasing cost reductions. Within our national consumer media operations, the positive impact will be felt of the cost reductions made to date and of the sale of the Evening Standard at the end of February. As a consequence, DMGT’s operating profits will be weighted more than last year towards the second half of the year.”

Guardian Media Group chief executive Carolyn McCall told delegates that there is a model for the local press, focusing on hyperlocal.

“There will be models that emerge: investing in SEO, local press have to do that. There’s an opportunity for local press to go very local and build revenue around this. There are models, but it will have to be off a very different cost base,” said McCall.

She went on to describe Channel M – the television offshoot of the Manchester Evening News – as ‘a good model’ for local media that could be replicated in the future.

The business risks associated with online and sustainable digital business models, she added, need to be shared regionally and locally.

Regional media will have to take ‘a real hit’ on their bottom line when it comes to online to if they are to maintain standards of quality journalism, she added.

Malcolm Pheby, editor of the Nottingham Evening Post, took up the regional press’ baton in explaining how the NEP had successfully integrated its newsroom with staff now trained to treat all news stories as rolling news to be broken on the web.

But the pervading theme of the day has been the opposition from regional newspapers to the BBC’s proposed local video plans.

Pete Clifton, head of multimedia for the Beeb, did his best to defend criticisms of the plans, saying that the proposals are subject to assessments by the BBC Trust and suggesting that the BBC could forge stronger relationships with other news providers.

Still it was comments from McCall and Clarke, whose affiliate Northcliffe added its voice to the debate today, that received impromptu applause.

According to both, the BBC’s plans present unfair competition to the local press

Cue videojournalism evangelist and consultant Michael Rosenblum, who promised to teach the audience how to beat the BBC at its own game. Key to this he said is embracing technology, in particular video, wholeheartedly and not incrementally.

In response to a question from a Rotherham newspaper publisher, which currently has no video on its website, Rosenblum said there was a demand for the content and the potential for partnerships with regional broadcasters like ITV local.

Northcliffe’s parent company Daily Mail and General Trust revealed in a trading statement earlier this week that its regional news division had seen a 90 per cent increase in digital revenue during the final quarter of 2007.