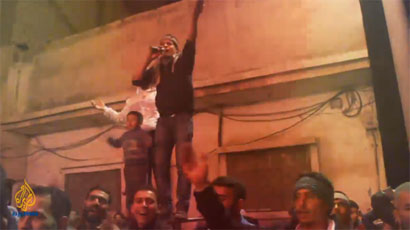 In an interesting development for mobile journalism, Al Jazeera is due to broadcast a documentary tomorrow night (Wednesday, 14 March) on Syria which has been filmed by a journalist using just an iPhone due to safety concerns.

According to a press release, the film, called ‘Syria: Songs of Defiance‘, “follows the journalist, who is not named to protect the people he spoke to, on a journey amongst the uprising in Syria”.

At the start of the documentary, the release adds, the correspondent for Al Jazeera will be heard saying:

I can’t tell you my name. I’ve spent many months secretly in Syria for Al Jazeera.

I cannot show my face and my voice is disguised to conceal my identity, because I don’t want to endanger my contacts in Syria.

Because carrying a camera would be risky, I took my cell phone with me as I moved around the country and captured images from the uprising that have so far remained unseen.

In an opinion piece in the Independent yesterday former chief correspondent of Panorama Tom Mangold called on the BBC to conduct a “searching inquiry into why its system of firewalls broke down”, in reference to last week’s finding of the BBC Trust’s editorial standards committee that certain footage within a Panorama documentary was “more likely that not”, not genuine.

The BBC was ordered to make an on-air apology after a Panorama documentary about retail outlet Primark was found to have breached editorial guidelines on accuracy and fairness. The ESC said it had examined a “substantial body of evidence”, including rushes tapes, emails to the programme team from the freelance journalist who obtained the footage and witness evidence, in relation to a specific piece of footage which appeared in the film.

Although it admitted it was not able to say beyond reasonable doubt, the committee concluded that it was more likely than not that the footage was not genuine.

Writing in the Independent Mangold claimed the delay in this admission has caused “an editorial catastrophe”.

It is only now, three years after the programme was broadcast, that the BBC Trust has forced Panorama to admit the error of its ways. In the meantime, the BBC’s arrogant refusal to admit it was wrong has resulted in an editorial catastrophe not only for Panorama, the flagship, but for all the corporation’s journalism.

I joined Panorama from Fleet Street, where none of us had entirely clean hands. We coloured our stories as much as we could and thought nothing of doing things our editors never wanted to hear about. But, whatever we did, we never lied, deceived or made stories up. It was the short cut to the dole. And if a story wasn’t good enough or couldn’t be made to work – then there was always another round the corner. I know what it means to have to deliver with a tiny budget, but I also know when to give up.

The Telegraph reports that as of yesterday afternoon a total of 898 people had “registered their disapproval” of the Choosing to Die documentary, broadcast on Monday by the BBC.

The documentary shows author Sir Terry Pratchett, who was diagnosed with Alzheimer’s three years ago, travel to the Dignitas Clinic in Switzerland and witnessing the procedures for assisted death.

The corporation said 898 people had registered their disapproval of the documentary presented by the author Sir Terry Pratchett, with 162 fresh complaints since it aired on Monday night.

A spokesman from the BBC was also said to add that the broadcaster has also received 82 “appreciations” of the programme.

Update: Journalism.co.uk has received updated figures from the BBC. There have now been 226 appreciations received and 408 complaints, bringing the total up to 1,150 complaints.

According to a spokesman the 226 appreciations make it one of the top 10 most appreciated BBC programmes this year. A new documentary on the New York Times is to hit the silver screen soon.

According to the blurb, director Andrew Rossi “deftly gains unprecedented access to the New York Times newsroom and the inner workings of the Media Desk”.

“I still can’t get over the feeling that Brian Stelter was a robot assembled to destroy me,” says Carr.

Presenter of the BBC One’s Panorama Jeremy Vine will be leaving the show at the end of the year, according to a report by the Guardian.

When Vine steps down – after four years with the programme – the show will continue without a regular presenter.

Last month Journalism.co.uk reported on an investigation into corruption within FIFA by freelance sports journalist Andrew Jennings which was broadcast by Panorama and prompted an inquiry by the International Olympic Committee (IOC) into the claims.

The broadcast was criticised by some viewers for its timing, just before a meeting in Zurich where FIFA announced the host of the 2018 World Cup. But Panorama’s editors defended the investigation.

On 24 July film-makers will have the opportunity to take part in a cinematic experiment aiming to create the world’s largest feature film.

Entrants to YouTube’s Life in a Day project, which boasts film director Ridley Scott as its executive producer, will have 24 hours to record a snapshot of their life on that date and upload it to the project’s YouTube channel. The best footage will be selected and edited by director Kevin Macdonald for a feature film to premiere at the 2011 Sundance Film Festival.

Anyone whose footage is used will be credited as a co-director, and all submissions will feature on the Life in a Day YouTube channel irrespective of whether they make the final cut.

The following instructions to take part are posted by the project:

Film-makers have the chance to win a $25,000 grant in the first annual Vimeo Awards, which will recognise short films in a variety of categories.

The grant will go to the winner of the Vimeo Award, or Grand Prize, who will be selected from the individual category winners.  The Vimeo Award winner will receive the grant to create an original piece of work, which will be premiered at the Vimeo Festival and Awards in 2011. It will also feature on the video site’s homepage.

Winning entrants from individual categories will have their work promoted on Vimeo’s homepage and the Vimeo Festival and Award Site.

The deadline for submissions is July 31 and winners will be announced by October 9. Entries cost $20 or $5 for Vimeo Plus paid subscribers.

A two-day festival will be held on 8-9 October in New York to accompany the contest. It will include panels, parties and screenings of the winning entries.

The guidelines for Documentary entries are as follows: