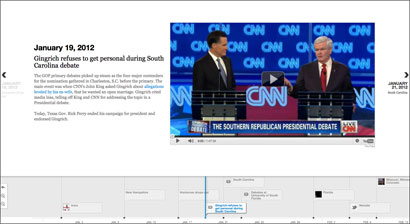 Tool of the week: Timeline

What is it? A wizard to enable you to create and embed a timeline of curated content.

How is it of use to journalists? News sites often use a timeline for digital storytelling. This is a tool just released to enable you to do just that.

There are several examples, such as a Timeline of the Republican run-up.

Mashable compares Timeline to Storify, a tool that enables you to curate web content by dragging and dropping tweets and other media to create a story.

Timeline, created by Zach Wise, a multimedia journalist and journalism professor, was developed in partnership with the Knight News Innovation Lab at Northwestern University, where Wise teaches. The interactive tool allows users to generate timelines on the web by curating content from Twitter, YouTube, Flickr, Vimeo, Google Maps and SoundCloud.

“The tools that already exist on the web are almost all either hard on the eyes or hard to use,” said Wise. “Timeline is an open-source, JavaScript and HTML/HTML 5 based tool that creates elegant timelines.”

Timeline does not offer the simplicity of Storify and although aimed at non-techies, it will require you to add some code to the head of your site and will take a quite a bit longer to create than a Storify.

One way you can create the timeline is by using a Google Doc. Timeline provides a template and you can simply add your links to the media.

For example, the below screenshot shows how we used the Google Doc template to create a timeline of some of the key phone-hacking moments, adding a Flickr photo, tweets and YouTube footage. 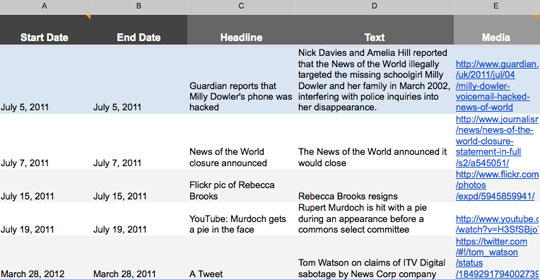