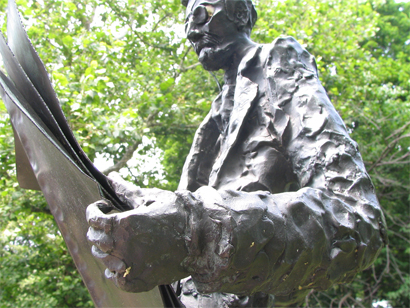 Statue of Joseph Pulitzer in New York. Image by ConspiracyofHappiness on Flickr. Some rights reserved

The Pulitzer Prize board has announced some changes to the awards, taking its submissions process online and revising the breaking news category to reflect real-time reporting.

The changes to the breaking news category suggest that coverage on social networks and liveblogs may be considered for the prestigious prize from 2012.

According to a release from the prize board, the revised definition for the category reads:

For a distinguished example of local reporting of breaking news that, as quickly as possible, captures events accurately as they occur, and, as times passes, illuminates, provides context and expands upon the initial coverage.

This replaces the previous definition:

For a distinguished example of local reporting of breaking news, with special emphasis on the speed and accuracy of the initial coverage, using any available journalistic tool, including text reporting, videos, databases, multimedia or interactive presentations or any combination of those formats, in print or online or both

The board added that it would be “disappointing if an event occurred at 8am and the first item in an entry was drawn from the next day’s newspaper”.

Last year’s Pulitzers saw no award given in the breaking news category for the first time.

There were three nominations – the Chicago Tribune for coverage of the deaths of two firefighters, the Miami Herald and El Nuevo Herald for their coverage of the earthquake in Haiti, and the Tennessean, Nashville, for coverage of flood in the state – but no winner. Winners are required to gain a majority vote on the 16-strong board.

The other major change is that applicants will also now be able to make their full submission online.

“The new entry system ends the submission of entries on paper, typically in the form of a scrapbook, a practice dating to the start of the prizes 95 years ago. All entry material, ranging from stories to photographs, graphics and video, must now be submitted in a digital form through a special Pulitzer entry site,” the release from the Prize said.

Last December Pulitzer Prize rules changed to include multimedia journalism, allowing entries to be submitted as text reporting, videos, databases, multimedia, interactive presentations or any combination of those formats.

See the full release on the Pulitzer Prize site.

Over on his 10,000 Words blog, Mark S. Luckie has pulled out the multimedia elements of this year’s Pulitzer prize winners, showing how “traditional print stories can be married with multimedia and online projects to create a more dynamic and enticing story package”.

Eight examples at this link…

Editor & Publisher’s Mark Fitzgerald talks to veteran Wall Street Journal and Economist Group journalist Roy J. Harris Jr. about the Pulitzer Prizes, and the chances of online-only journalism being in among the winners this year.

More than a decade ago, in 1999, the Pulitzers opened entries to online content, and in the past two years has eased eligibility requirements for entries by online-only news organizations. Yet, no entry that appeared only on the Web has ever won a Pulitzer.

“It’s one thing to have press release from the Pulitzer organization that we welcome online entries,” Harris said. “But when you go a couple of years without anyone winning it – that sends a signal too.”

Now confirmed in a story on the National Enquirer’s website (which is playing up, but a cached version is at this link) – the Enquirer has been accepted into the Pulitzer prize competition for its coverage of the John Edwards scandal and for breaking the story of the former Democratic presidential nominee’s affair with a campaign worker, his cover-up of expenses and an investigation into possible “misappropriation” of campaign funds.

“The Pulitzer Board’s decision to give The Enquirer its rightful place in the competition for the award shows the old guard journalists recognize and respect the importance of the investigation by the paper’s reporters, photographers and editors,” writes Emily Miller.

The Pulitzer Prize Board has elected its first member from a primarily online news organisation, Jim VandeHei, executive editor and co-founder of the political site Politico. It follows the recent decision to relax the prize rules for online sites, reports the Toronto Star.

More from Politico at this link…

The Pulitzer Prizes yesterday announced that even more web-only outlets will be able to compete in its journalism prizes for 2010.

Last year, the Pulitzer Board allowed non-print newsrooms to compete for the first time in the 14 journalism categories, but stipulated they must be ‘primarily dedicated to original news reporting and coverage of ongoing events’. Today’s announcement states that restriction has been lifted.

As noted last week, the Pulitzer prizes will now allow entries from online-only publications. But, as online writers were quick to comment, not all bloggers are welcome.

As Robert Niles notes, “the awards are not throwing open their doors to every blogger on the planet. Entries are restricted to U.S.-based publications which ‘regularly engage’ in original reporting.”

He gives a full guide to entering, with some additional comments from Sig Gissler, administrator of the Prizes. “The Pulitzer Board is not creating new categories for online-only work at this point, but he [Gissler] noted that the Pulitzers ‘have changed a lot in recent years’ in expanding eligibility for online work,” Niles writes.

‘Online-only news outlets’ will be eligible for Pulitzer prizes for the first time.

Submissions must, however, be text-based and website of magazines and broadcasters will not qualify for the awards.