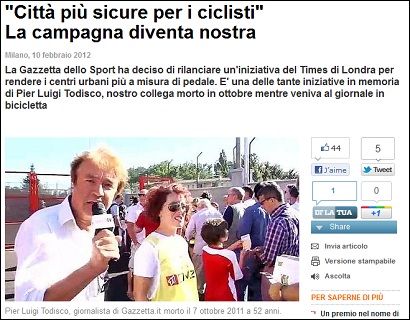 Industry groups in Italy are calling on the country’s government and ministry of work to fix minimum standards for the treatment and pay of freelance journalists, according to the website of Liberta di Stampa Diritto all’Informazione (LSDI).

It is absolutely unacceptable that independent work is paid with compensation so low that the vast majority of freelance journalists declare an average annual income that is lower than the poverty threshold indicated by ISTAT [the Italian statistics institute].

LSDI has also written and published an ebook on the working conditions for journalists in Italy.

Reports in Italian by LSDI…

Summarised and translated by the Editors Weblog…

Online news is gaining popularity in Italy, according to a survey cited by the Shaping the Future of the Newspaper blog.

Research by the Mediawatch Journalistic Observatory suggests readers of online daily news outlets has risen to 39 per cent this year. In 2007 only 25 per cent of internet users read online news.

Trust in the information provided by online dailies has also increased from 18 percent to 45 percent in the last three years, the survey revealed. Overall, Italians are spending more time online and 59 percent said they are using social networks, way up from the 12 percent who used them back in 2007, Ansa revealed. Nonetheless, there is still opposition to buy online and only 21 percent trust digital payments.

As Journalism.co.uk reported last week, the revised bill will allow the publication of transcripts “relevant to an investigation”, but campaigners remain concerned by a clause in the new version which, according to European Digital Rights, requires anyone “responsible for information websites” to publish corrections within 48 hours of a complaint of inaccuracy being made, or else face fines of up to 25,000 euros.

There’s a huge amount of convergence within the reputation industry at the moment. the New York Times, FT and Guardian have all run lengthy features in the past two weeks on the issue of “managing your brand” as an individual. Just last week we saw a Facebook user sued for posting defamatory comments on a friend’s profile.

We’re yet to see a UK brand put a law like the one proposed in Italy into action, but as the courts start to impose stricter rules and the idea of managing personal reputation becomes more mainstream, these types of regulations will become more commonplace.

Full post on New Media Age at this link… Some interesting examples of how publishers are branching out into e-commerce were given at this morning’s opening session of the World Association of Newspapers (WAN)/World Editors Forum (WEF) conference by Iñaki Palacios and Francisco Amaral, directors of design firm Cases I Associats.

The pair advocated ‘monetising the channel not the content’ when it comes to charging online and looking at how e-commerce can be brought in.

“Our world is not only editorial it feeds business,” said deputy editor, Gianni Valenti in a video clip in the presentation.

“Having a strong brand name gives a guarantee – it is the only way of overcoming fears that people have of buying online.”

Neatly illustrating his point, Valenti said adding a newly-signed football player’s shirt shortly after his transfer has been announced during the transfer window was particularly important, for example.

“The question of the truth and of accountability underpinning this issue, which has been round the world, has also become a question of freedom. The Prime Minister in attacking Repubblica is attacking the whole of the press of the western world,” said Carlo de Benedetti, chairman of Italian publishing group Gruppo Editoriale L’Espresso, this week in the below speech, entitled ‘Newspapers and Democracy in the Internet Era. The Italian Case’, to the Reuters Institute for the Study of Journalism.

De Benedetti was referring to the legal action brought against La Repubblica, which is published by L’Espresso, by Italian Premier Silvio Berlusconi.

Berlusconi had refused to answer 10 questions posed by the paper to the leader regarding a series of alleged scandals. Berlusconi took legal action and claimed for damages against the paper prompting an online petition from the paper.

“On November 5, after six months of attacks and allegations, the Italian Premier finally had to answer the 10 questions posed by Repubblica. This decision shows that the questions were legitimate, that it was journalistically correct to ask them, reiterate them and demand an answer. The delay with which the answer arrived was definitely politically significant. Equally significant was the method chosen for the answers: rejecting a direct confrontation with Repubblica or a dialogue with public opinion, opting instead for a journalist friend and his book, published by the publishing house owned directly by the head of the government. A controlled and protected political operation,” explained de Benedetti in his speech reproduced below via Scribd, in which he also comments on the role of citizen journalists and online news sites.

“A press freedom protest organised by the National Federation of the Italian Press, in the Italian capital Rome on Saturday, and which according to the organisers drew over 300,000 participants, was on the same day criticised by Italian public broadcaster Rai 1,” reports the International Press Institute.

This week Italy’s Constitutional Court has overturned a law granting prime minister Silvio Berlusconi immunity from prosecution while in office.

Berlusconi’s lawyers have sued La Repubblica for allegedly defaming the prime minister by repeating its questions about his private life and political aspirations each day (Journalism.co.uk).

According to several news reports the Italian Competition Authority searched Google’s Milan offices this morning as part of an investigation into the company’s abuse of its ‘dominant position on the internet’, says paidContent:UK.

The investigation was sparked by a complaint from the Italian Federation of Newspaper Publishers criticising the search giant’s lack of transparency in handling Google News – in particular the ranking process.

Google responds on its European Public Policy Blog stating that publishers can request to be removed from Google News at any time and that Google drives vast amounts of traffic to publishers’ websites.

L’Espresso, the publisher of La Repubblica, Italy’s second largest newspaper, is suing the Italian prime minister and media owner, Silvio Berlusconi, the BBC reports. It said that Berlusconi had not yet responded to allegations.

“L’Espresso also publishes a magazine of the same name, and both publications have led recent investigations into Mr Berlusconi’s personal life.

“The group also said the PM had discouraged businesses from buying advertising space in its publications.

“According to a complaint lodged with a Milan court, the group’s lawyers have also accused Mr Berlusconi of abuse of office and of flouting market rules.”