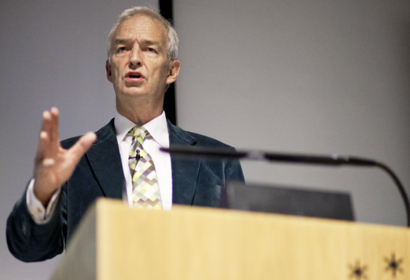 Channel 4 News presenter Jon Snow gave the annual Hugh Cudlipp lecture last night, in which he gave a powerful speech on what he views as the advent of “journalism’s golden age”.

Snow has published the full version of his speech on his Snowblog, but here are some highlights from the lecture.

Much of his speech discussed how new technology and real-time news across platforms has an impact on the work of journalists:

Contrast therefore my first reporting from Uganda in 1976 and my most recent foreign assignment in 2011.

That first report on the ground in Uganda dealt with the horror of Amin, it was graphic, and because I was not constrained by immediate “live” deadlines and the rest, I had time to hang about to try to grab an interview with the tyrant: that’s the upside. But I had little mechanism for developing any sense of how the story connected with the outside world – the UN, Westminster and the rest.

… Contrast that with my last major foreign assignment in Cairo’s Tahrir Square where I tweeted, blogged, reported, fed the bird, and then anchored that night’s Channel 4 News live from just outside the Square. Mind you, with the pressures of time, some of the fun has gone out of it all.

For journalists, he said, the “liberation” of the media gives way to a new “golden age of journalism”:

He also passed comment on some of the biggest issues facing the news industry today, from regulation to the phone hacking scandal:

I think it is absolutely right that there is a regulator that people can go to. Who are we to be above the opportunity for people to review what we’ve done? Furthermore I do not want to find my own editors somewhere in the mix. I want an objective regulator.

And not forgetting the Leveson inquiry, which is currently looking at the culture and ethics of the press:

Leveson should recommend many of the people and institutions that have been before him find a way of allowing their staff to get stuck into the real world, it will vastly improve and deepen their journalism. We journalists are not a breed a part – we must be of the world we report. The hacking scandal reveals an echelon of hacks who removed themselves from the world in which the rest of us live – they took some weird pleasure in urinating on our world.

But finally, he called for journalists to be given more time and space wherever possible:

The speed and pace of what all of us is doing is starving, television journalists in particular, of the opportunity to develop the stature and presence of our forebears.

These were people who had days in which to prepare their stories, dominated a tiny handful of channels, and became iconic figures in the medium. It is much, much harder for journalists today to ascend the same ladder and preside with their kind of authority and we need to afford talent the time, the space and the working experience to develop the authority that our medium depends upon.

Financial Times editor Lionel Barber accused Fleet Street of being ruled by a ‘conspiracy of silence’ over the News of the World phone-hacking scandal, and said it was because of other newspapers being involved in the so-called “dark arts”.

Barber was giving the Hugh Cudlipp lecture last night at the London College of Communication.

Below is an excerpt from his 5000-word speech, a full version of which can be found here.

The phone-hacking scandal marks a watershed – not just for News International but also for tabloid journalism. True, the practice of phone-hacking was widespread (and not only among the tabloids). The Information Commissioner’s report in 2006 showed that 305 journalists used private investigators. The number may well have been higher. And yet, beyond the conviction of one News of the World journalist and one private investigator, the infamous Glenn Mulcaire, no serious action was taken against them; not by the police, not by the courts, and not by the Press Complaints Commission.

The PCC was supine at best. And while the Metropolitan Police has now re-opened its inquiry, many questions remain about why it did not pursue the original News of the World investigation with sufficient rigour.

Most important of all, the newspaper industry itself did not take the issue seriously or seek to establish the truth. Indeed, aside from the lead taken by the Guardian, which was followed by the FT, BBC and Independent, the rest of the newspaper industry took a pass on the News of the World phone-hacking story – almost certainly because they too were involved in “dark arts”.

Yesterday the Press Complaints Commission announced it was setting up a phone-hacking review committee to draw together the lessons learned as a result of the outcomes of the relevant police inquiries and ongoing legal actions in the phone hacking case.

The Metropolitan police are currently investigating the use of phone hacking by the News of the World after reopening the case earlier this month.

You either love or hate it, but according to Peter Kirwin the celebrity gossip filled pages of British tabloids could be its saviour in the future.

In a Wired.com post, Kirwin talks about why digital replications are not the long-term solution and that British tabloids need to get back to the roots of their popularity.

There’s plenty of life left in print. But publishers need to start work on long-term alternatives to the failed approach of simply dumping print content into digital formats. Stripping down the disintegrating bundle of delights stitched together by Hugh Cudlipp in the 1930s and focusing exclusively on celebrity coverage could yet emerge as one route to salvation (…) Happily, the demented intensity of celebrity coverage also reflects the presence of a real commercial imperative: the entertainment industry’s need to shift units in an era of audience fragmentation.

Guardian editor Alan Rusbridger strongly believes journalists should link to the specialist source. We’re rather fond of that approach here, so here’s his Hugh Cudlipp lecture in full. There’s a video interview at this link.

There is lots to pull out here, but key were his comments on pay walls – he doesn’t believe it makes commercial or professional sense:

[C]harging might be right for some bits of the Murdoch stable of media properties, but is it right for all bits of his empire, or for everyone else? Isn’t there, in any case, more to be learned at this stage of the revolution, by different people trying different models – maybe different models within their own businesses – than all stampeding to one model?

As an editor, I worry about how a universal pay wall would change the way we do our journalism. We have taken 10 or more years to learn how to tell stories in different media – ie not simply text and still pictures. Some stories are told most effectively by a combination of print and web. That’s how we now plan our journalism. As my colleague Emily Bell is fond of saying we want it to be linked in with the web – be “of the web”, not simply be on the web.

You can also hear Rusbridger talking about pay walls in Coventry two weeks ago: http://podcasting.services.coventry.ac.uk/podcasting/index.php?id=298

END_OF_DOCUMENT_TOKEN_TO_BE_REPLACED

All you really need to know about UK tabloid The Sun‘s editor Rebekah Wade‘s Hugh Cudlipp lecture, courtesy of Wordle (hat tip to Jason Cobb). Or read the speech in full here.