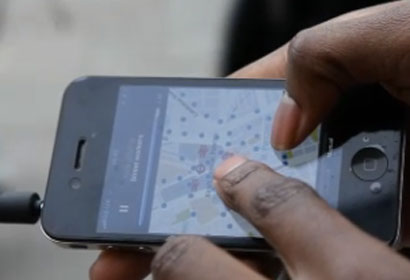 The Guardian has launched Streetstories, an iPhone and Android app, providing audio stories based on the phone’s location.

The app is another Guardian project focusing on social, local mobile and is launched the day after the public release of n0tice, another move by the news organisation into the SoLoMo space.

Launched ahead of the Guardian’s Open Weekend event this weekend, the Streetstories app provides a guide to King’s Cross,the area of London where King’s Place, the Guardian building where the event will take place, is located.

Francesca Panetta, the app’s creator, has blogged about it.

Streetstories is a free app for iPhone and Android which triggers audio relevant to your location – your smartphone knows where you are, and plays the stories automatically. The way the app works is you plug in your headphones, start up the ‘autoplay’ mode and put your smartphone in your pocket. The app will find where you are and start playing the clips, so you don’t need to press any buttons, just wander anywhere in the area and your route will create your own narrative

On the anniversary of last year’s devastating earthquake in Haiti, Nieman Journalism Lab’s Michael Morisy takes a look at the media response to the crisis and some of the tools at its centre, including radio, Ushahidi’s mapping platform and crowdsourcing.

Critical to parsing through all the data were centers far outside of Haiti, like one group in Boston that helped geolocate emergency texts, information that was then passed along to relief workers on location. Groups of Haitian expatriates helped translate the flood of data from Creole, French, and Spanish into English, passing it along to the most appropriate aid organizations as well as the U.S. Marines, who often served as the basis for search-and-rescue missions.

In Haiti, the report found the use crowdsourced emergency information had hit a turning point, helping inform real-time decision-making.

Despite the hype surrounding geolocation, the technology is fairly new. Many publishers are still navigating geolocation and few have taken advantage of platforms like Foursquare, Gowalla, HTML5’s geolocation API and Twitter’s geotagging abilities despite the rich potential.

Geolocation can help publishers serve more relevant content or cover an event like never before. However, to use the technology to its fullest potential, it’s going to take some creativity.

Particularly like Blanda’s ideas for the news cafe – something tried physically by publishers such as Agora in Poland:

(…) with new geolocation technology, the news café can be everywhere. Businesses and restaurants have all used Foursquare to offer specials and discounts, why not media companies? Whether its your offices, your booth at a trade show or locations frequented by your readers, offer a free issue to people in check in at designated locations.

As reported last week by TechCrunch, microblogging service Twitter has switched on part of its new geolocation API, which will see latitude and longitude coordinates attached to a user’s updates, who can choose to opt-in.

As an API this information will be available to third-parties – an idea taken up by iPhone app Tweetie, which is using it to map tweets.

Looking ahead, this could be a useful tool for news organisations, for example to plot Twitter buzz by location – especially to see what was being said about a news story by those in the area it had happened in.

While there are a range of ways for journalists to use Twitter for newsgathering purposes, this new functionality has great potential too, as suggested by Mashable’s five-point plan.

Mashable’s suggestions of tracking trending places – useful for monitoring breaking news trends on Twitter over an area; and an extension of an existing service, Tweetmondo, using the new API that would send you a direct message whenever someone mentioned a place of interest to you.

As well as notifying journalists about tweets relating to certain places on their patch, a service like this could also be used in a marketing/commercial tie-up. For a local news organisation, for example, such tweets could be used to attract new readers by targetting places of interest to them – businesses or attractions they frequent for example.

Additionally there’s scope for local news organisations to stream location-based tweets to create a real-time feed of conversation about their area.