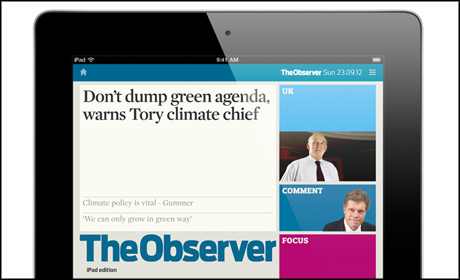 The Guardian announced today that it is re-launching its iPad edition to include the Observer, with the first iPad issue of the Sunday newspaper to be released on Sunday 16 September.

In a release the publisher said the Observer iPad issue will feature “the main news section of The Observer, the New Review, the sport section and the Observer Magazine”. Editor of the Observer John Mulholland was quoted as saying:

As the world’s oldest Sunday newspaper, we’re thrilled to be able to bring our journalism, ideas and debate to a new digital platform in a fresh way, enabling our unique content to be made available to both loyal readers and new audiences around the world. The look and feel of The Observer in the app is very much in line with that of the newspaper and we look forward to hearing our readers’ feedback.