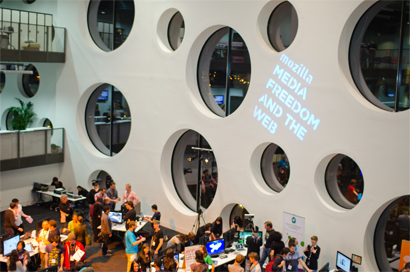 The Mozilla Festival took place this weekend and provided journalists, open web developers and educators with a place to learn and to build.

Here are six tips from the festival, which was called media, freedom and the web.

1. In less than a week there will be a Data Journalism Handbook. Created in 48 hours with contributions from 55 people, the first draft was written at the festival and is due to be published next week. The book provides journalists the chance to get to grips and to learn from some of the key data journalists in the UK and abroad.

3. Expect exciting developments in HTML5 news web apps. Developer Max Ogden presented a live web app in the final show tell which added photos tweeted by the audience with hashtag #MozFest. In real-time the images appeared in the app displayed on a large screen. This type of app has huge potential for news sites and user-generated content.

4. SMS may not seem like cutting edge technology but should not be ignored when it comes to engaging with the audience. Text messages can be automatically sent to Google Fusion Tables and uploaded manually or posted to a map in real-time. Here is an example where the company Mobile Commons enabled San Francisco public radio to map listeners’ earthquake readiness.

5. It will be worth keeping an eye on the five Knight-Mozilla technology fellows being placed in newsrooms at Al Jazeera English, the Guardian, the BBC, Zeit Online and the Boston Globe to see what is produced. Each news organisation selected an individual based on an area of journalism they wanted to develop. The five will now be embedded in the different newsrooms and tasked with bridging the gap between technology and the news.

6. Want to get to grips with HTML5 for journalists? Do you want to start coding but don’t know where to begin? The w3schools site offers guides to HTML, HTML5, CSS, PHP, Javascript. If you want to start scraping data then ScraperWiki, which allows you to scrape and link data using Ruby, Python and PHP scripts, has some hugely useful tutorials. If you simply want to take a look to see how HTML actually works within a webpage then Hackasaurus has an x-ray goggles tool to allow you to do just that.

There were several sessions, including on WordPress, trusting news sources, tools for a multilingual newsroom, online discussions, text edit for audio and real-time reporting, which were were unable to attend. Search for the #MozFest hashtag for further reports from the festival.

3 thoughts on “#MozFest: Six lessons for journalists from the Mozilla Festival”