The National Union of Journalists has welcomed news that Guardian News and Media editor-in-chief Alan Rusbridger has offered to take a pay cut – and the union has called on other newspaper bosses to do the same.

“I welcome Alan’s response to the NUJ’s suggestion that he should take a pay cut and show a lead to executives within the industry at a time when many journalists face redundancy and pay freezes. I hope that others including Sly Bailey, chief executive of Trinity Mirror, and Richard Desmond owner of the Express newspapers, will now be following suit.”

Trinity Mirror investors have expressed concern about Bailey’s pay package, almost £1.7 million in 2010. The company’s share price has fallen by 87 per cent in the past decade. 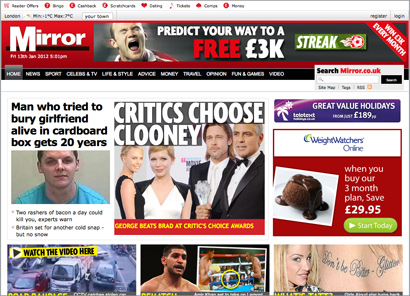 In a release, Rummble Labs said it will integrate its technology across the Mirror’s website, 3am and the Mirror’s football site to “provide better targeted and personalised content to users”.

The technology will deliver personalised content by combining real-time analysis of social data with site activity, the release states.

Rummble Labs said that the technology will allow Trinity Mirror to take activity data and combine it with meaningful social data insights from Facebook, to provide powerful recommendations on content or products.

The recommendation engine will provide highly-personalised content for our users and will drive engagement and page views across our news, entertainment and sports sites.

We will be helping Trinity Mirror make sense of a huge amount of social data and enabling them to unlock the real value of that data.

Announcing the launch of an internal review of editorial controls and practices last week, Trinity Mirror, publisher of the Daily Mirror, was keen to stress that the review was not connected to recent phone-hacking allegations levelled against its tabloid.

The publisher issued a statement in response to the claims that the Mirror was implicated in the use of the so-called dark arts, calling them “totally unsubstantiated”.

But allegations concerning the paper have since mounted. Lawyer Mark Lewis, who has represented a number of celebrities in phone-hacking suits against News International, said in yesterday’s Sunday Times that the Mirror is facing “about three or four cases which will start within the next few weeks”.

Another report, in the Independent on Sunday, claims that “top investors” in Trinity Mirror, undoubtedly concerned by the steep share-price drop the company saw last week, “want to know more” and have quizzed chief executive Sly Bailey.

Former Daily Mirror editor Piers Morgan, who was fired by Bailey in 2004, has come under scrutiny as the spotlight shifts from News International to Trinity Mirror, although he denies any knowledge of criminality at the Mirror during his time there. Conservative MP Louise Mensch was forced to apologise to Morgan in parliament last week, after incorrectly stating he had admitted being aware of phone hacking at the tabloid.

Citing evidence collected by the Information Commissioner’s Operation Motorman report, blogger Guido Fawkes has alleged that Morgan signed off on £442,000-worth of invoices submitted to the paper by a private detective. It is important to note, however, that the use of a private detective does not necessarily involve any criminality.

According to a report in yesterday’s (31 July) Sunday Telegraph, Trinity Mirror is planning to increase its cost-cutting target for the year from £15 million to £25 million, triggering further job losses.

The company is due to publish its annual financial results on 11 August.

The editorial director of the north east regional division of Trinity Mirror Paul Robertson is to leave after 22 years working for the publisher.

In a statement Robertson, who was also editor of the Newscastle Evening Chronicle, said he was after a “fresh challenge”.

Having project managed the recent change in the Chronicle publishing schedule, I think it’s now the right time for me to seek a fresh challenge. The team in the north east is outstanding and I would like to thank them all for their support. I will miss the place but most of all the people I have worked with, many of whom are friends as well as colleagues. I wish everyone at ncjMedia and GMC the best of luck and success for the future.

According to Trinity Mirror, under Robertson’s editorship many new platforms and campaigns have been created, such as Your Health, Community Champions and the Great Family Read. He was also “centrally involved in driving the multimedia agenda, overseeing the launch of ChronicleLive”, a release added. Trinity Mirror today announced the appointment of Chris Ellis to a newly created role of managing director, digital, within its nationals division.

The former senior vice president and chief operating officer for Europe at MySpace will be responsible for increasing digital growth, according to a release.

Chris Ellis, said: “I’m delighted to be joining Trinity Mirror. I’m excited by the opportunity to lead the new dedicated digital group which, together with such a strong editorial heritage and passionate consumer base, means the company is well positioned to take full advantage of the growth of all things digital.”

Advertising revenues at Trinity Mirror dropped by 10 percent in the first four months of the year, according to an interim management statement published today.

The trading environment remains challenging due to the fragile economic environment and the adverse effect of public sector spending cuts and tax increases. These factors continue to adversely impact the key drivers of our business, such as consumer confidence, unemployment and the property market and are contributing to revenue declines.

In March, Trinity Mirror reported a 17 per cent rise in operating profit for 2010, following the acquisition of GMG Regional Media.

According to the Sky News report, Trinity Mirror, which publishes the Daily Mirror and around 150 regional titles in the UK, approached Mecom with an all-share merger offer in November but was rebuffed.

A spokesman for Trinity Mirror told Journalism.co.uk today that it doesn’t comment on market speculation.

Mecom has not yet responded to a request for comment.

Trinity Mirror had “contemplated” selling some of its shares to the Daily Mail and General Trust earlier this year in return for DMGT’s regional newspaper group Northcliffe Media coming under its control, according to a report from the Guardian.

This would reportedly have been part of a merger which was allegedly being considered by the newspaper owners.

The basis of the deal was a scheme to bring together the two companies’ regional newspaper groups under the control of Trinity Mirror. In return Trinity would have offered a mixture of cash and shares to DMGT, giving it a strategic shareholder for the first time since the days of Robert Maxwell.

Negotiations between the two sides came to a halt, although Daily Mail executives have told their counterparts at Trinity that negotiations could resume in future.

Interim management statements published this week by Johnston Press and Trinity Mirror suggest declines in advertising revenues appear to be slowing for both publishers.

In a statement published today, Trinity Mirror said trading since the half year “has remained volatile due to the fragile economic environment and the uncertainty resulting from the Government spending review”.

The Board envisages that the trading environment will remain challenging over the remainder of the year and into 2011, however, it anticipates that the rate of decline in revenues will improve.

It added that full ownership of Fish4 will boost its digital recruitment ad revenues by £3 million in the first full year.

This report followed Johnston Press’s statement yesterday which reported a decline in total advertising revenue for the second half of the year to date of 5.4 per cent (year-on-year). This represents an improvement on the first half decline of 6.3 per cent, the report adds.

In order to reduce costs the publisher announced it would be closing its printing operation in Limerick. A spokesperson told Journalism.co.uk this would impact on 29 part-time workers.

As reported by The Business Desk West Midlands earlier this week, Trinity Mirror is launching a new freesheet as a sister paper to the paid-for Birmingham Post, which changed from a daily to weekly publication last year.

Birmingham Post Lite will be delivered to around 18,000 homes in the south Birmingham areas of Harborne and Moseley and will contain a selection of the Birmingham Post’s editorial content and material from its Post Property magazine, says a release.

The new newspaper will not carry the paid-for Post’s specialised business
and financial news. Instead it will combine south Birmingham news with the features and leisure content from the Post’s award-winning team.

The BusinessDesk (TBD) had the date pegged as April 22, but suggests the launch is a direct response to plans for a new rival title, the Birmingham Press, from newspaper entrepreneur Chris Bullivant.

“The title (…) is intended to go head-to-head with the Press in the battle to secure advertising from the city’s mid-market estate agents,” says TBD’s report.