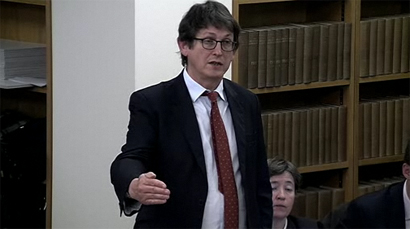 The Leveson inquiry into press standards heard from key industry figures today, including representatives for the National Union of Journalists, the Guardian and the legal representative of alleged “victims” given core participant status.

Michelle Stanistreet, general secretary of the NUJ spoke first, describing the Press Complaints Commission as “little more than a self-serving gentleman’s club, and not a very good one at that”.

She also accused the system of having “failed, and abysmally so”. Her full statement to the inquiry has been published on the NUJ’s site here.

The inquiry also heard from editor-in-chief of the Guardian Alan Rusbridger, who has posted his statement in full online.

Near the beginning of his statement Rusbridger highlights the shifts which have taken place within the industry and are affecting journalists:

We also live in a world in which every reader becomes a potential fact checker. Social media allows anyone to respond to, expose, highlight, add to, clarify or contradict what we write. We have the choice whether to pretend this world of response doesn’t exist, or to incorporate it into what we do.

The more we incorporate it, the more journalism becomes, as it were, plastic. There will be less pretence that we are telling the whole truth and nothing but the truth about a story, frozen at the moment it is published – what Walter Lippman in 1922 called the confusion between “news” and “truth”. A journalist today lives with the knowledge that there will be an external reaction to much of what she or he writes within minutes of publication. Journalism today is often less a snapshot, more a moving picture.

Video of today’s hearing is available to view on the Leveson inquiry website here.

The Financial Times reports this morning that the chairman of the Press Complaints Commission, Lady Buscombe, has demanded individual meetings with every publisher of national newspapers in the UK, including the Financial Times itself.

The face-to-face meetings are in an attempt to seek reassurance “that ethical scandals which have afflicted the industry will not be repeated”, according to the FT.

In an interview to coincide with publication of the PCC’s annual review, Lady Buscombe told the FT that “trust in the system was of paramount importance” after it had been undermined by scandals involving phone-hacking and other illegal journalistic methods. Trust was “one of the most important principles” of self-regulation, she said, adding: “If we are going to have trust in the system, I need [the publishers’] assurance that, whether it’s phone-hacking or any activities like that, it will never happen again.”

Dominic Crossley, whose firm represented Max Mosley in his case against News of the World, has responded to comments made by Sir Christopher Meyer, chairman of the Press Complaints Commission (PCC), to a select committee for culture, media and sport last week.

Meyer chose to ‘pour scorn’ on Mosley and not the News of the World, despite the fact that Mosley won his case and a breach of privacy was found in his favour, writes Crossley.

“[I]nstead of criticising the News of the World or even warning those involved as to their future conduct (both the editor and journalist concerned remain in their roles), the chairman of the PCC reserves his scorn for Mosley. Meyer’s approach does nothing to relieve the perception that anyone seeking redress from a national newspaper is wasting his or her time by going to the PCC,” he says.