The Guardian set up n0tice as a platform to utilise developments in social, local and mobile. It allows hyperlocals to brand their own noticeboard and keep 85 per cent of the revenue generated by charging for small ads.

n0tice will automatically update your Facebook page when you follow people and noticeboards, star things you find interesting, or post reports, events or offers to n0tice.  The app does not share passive actions to your Facebook page such as what you are reading on n0tice.com, only explicit actions that you trigger such as following, posting, reposting, and voting.

The n0tice app for Facebook will help spread things you are doing on n0tice further around the world and help others to discover what’s happening.

New online noticeboard, n0tice, which is owned by the Guardian Media Group, today announced the launch of an advertising platform which will enable noticeboard owners to earn revenue.

According to a post on the site, which also enables community groups, individuals, hyperlocals and bloggers to post announcements, event information and local news, noticeboard “owners” can now “earn revenue by selling featured positions for classified listings or ‘offers’.”

Outlining the model n0tice says owners will take an 85 per cent revenue cut, while the platform gets the remaining 15 per cent.

Posting an offer on a noticeboard is self-serve and free for n0tice participants. Offers can then be upgraded to a Featured placement for £1/day (or the equivalent base-level regional currency). Featured positioning includes both a visual enhancement and priority ranking on the page.

Alongside the new revenue platform, n0tice also announced the addition of other new features in today’s post, including geoRSS and the ability for each user to have a number of noticeboards. 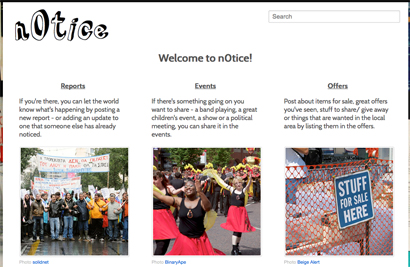 Online noticeboard n0tice has today opened to all community groups and hyperlocal sites after testing the technology with a limited number of users.

Groups can now create their own customised page, choosing a domain and can start to moderate activity. The platform is still being developed but there are plans to later introduce revenue-sharing between n0tice, owned by the Guardian Media Group, and page owners, such as hyperlocal news sites and bloggers.

notice is like a cross between a village noticeboard, Gumtree and Foursquare in that it is a space for users to post small ads, local news and announcements and that information can be pushed to location-enabled mobile phones and devices. There is more on how and why n0tice was created at this link and how it will make money by charging users for promoted, location-based small ads.

Following a recent invitation roll-out, hyperlocals, bloggers and community groups can now create their n0tice page, measure performance and activity with social analytics tools, and “moderate community activity in order to encourage the kind of behaviour they want to see on their noticeboard”, Sarah Hartley, one of the team behind n0tice told Journalism.co.uk.

This service is designed to serve community groups of all shapes and sizes, active local champions and community leaders, local publishers and bloggers, interest groups and hobbyists, and anyone who wants to manage a community noticeboard. We are focused on serving UK-based community groups, but it works anywhere in the world.

The service is still in development, and we have a lot we plan to add in the near future.

For example, we will develop revenue sharing opportunities via the classified advertising platform so that noticeboard owners can earn money. We will also develop a private, restricted access community noticeboard service which will be offered for a fee.

We don’t have a date when these services will be launched, but we release new capabilities on a regular basis.  You can follow @n0tice to stay in touch with the team.

Access to n0tice.com is open, but community participation is currently by invitation only. There are details on the technologies used to create n0tice here.

The platform is an online version of a village noticeboard, allowing people to post and find community news and classified ads. It is location-based, enabling searches and delivering news related to any location worldwide.

Guardian News & Media plans to make money out of the site, which was inspired by a hack day, by charging for featured ads and selling the white-labelled technology to companies wanting to use n0tice for commercial purposes.

The platform has a read API, a self-serve white label version and feed importing meaning that it can be adapted for hyperlocals and “could potentially work just as well for hyperlocal community bloggers in northern England as it could for cricket fans in India or birdwatching groups in Oregon”, Sarah Hartley, community strategist at GMG and one of a team of three working on the project told Journalism.co.uk.

Matt McAlister, director of digital strategy at the Guardian, has announced the latest developments in a blog post:

The release today is a big one for us. We’ve added the ability to create your own n0ticeboard.

He goes on to say:

As we go along we are increasingly unsure of what happens next. Participants are starting to determine what we do more and more. So, if you want this platform to do something, please get in early and share your thoughts with us.

The platform is in still private beta so invite-only, but Journalism.co.uk has 10 invites. You can try to claim a n0tice invite by clicking here.

Six months ago the Guardian Media Group called time on its regional news pilot Guardian Local, but it is continuing to experiment in the local market, its latest venture being n0tice, a location-based online notice board to share and read news and notices.

The hyperlocal website and mobile site is currently in private beta, with a team of three at GMG along with an army of contributors helping to shape the online version of the village notice board. Others who want to get involved will soon be able join.

n0tice was born out of a Guardian hack day and has SoLoMo, a trend towards social, local and mobile, at its heart, but as it does not currently have Guardian branding it feels more like an independent start-up than a child of the news outlet.

The platform is a space for people to buy and sell, like the classifieds section of a local newspaper, and can be used for general notices, local news and liveblogs or updates posted by citizen reporters as community news breaks.

It is like a reverse Foursquare, where rather than checking in to a business or venue, you allow your computer or mobile to grab your location information and the site finds the community groups, items for sale and news near you. 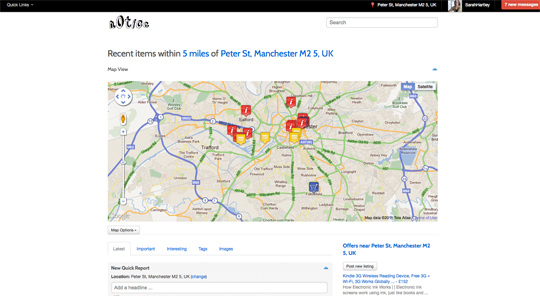 How is it going to make money?

Listing on n0tice is free but users get the option to pay for a featured post. Pricing is yet to be confirmed but the figure currently being worked with is a charge of £1 for each mile radius from the seller’s location per day.

The site, which can be used worldwide and white labelled, will be given free to hyperlocals and sold to commercial ventures, such as anyone who wants to use the technology to set up a location-based site, according to community strategist at GMG Sarah Hartley, who was head of online editorial at the Manchester Evening News and later launch editor of the now defunct Guardian local experiment.

And of course, being a Guardian platform, it has an open API.

Along with Hartley, who this week spoke about n0tice at the Brighton Future of News Group, two others are working on the development of the platform: Matt McAlister, who is director of digital Strategy (who in May announced n0tice with this thorough explainer) and developer Daniel Levitt (whose blog is here).

One of the areas the team is looking into is how to best reward users who contribute, with a current system in place of an ‘Editor’ badge which goes to the first user in an area.

The next round of users will be invited into the platform soon soon, with a planned release of the site next year. You can sign up to be one of those by entering your email address here, you can follow @n0tice on Twitter and get involved by joining this Flickr group and “celebrate noticeboards” by contributing photographs.