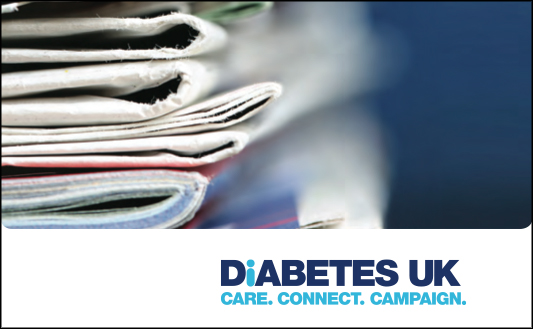 Diabetes UK has released a new guide aimed at helping journalists in their reporting on diabetes.

According to a release, as well as offering information on diabetes, the guide “also looks at the role journalists can play in challenging misconceptions around the condition” and offers some reporting tips. 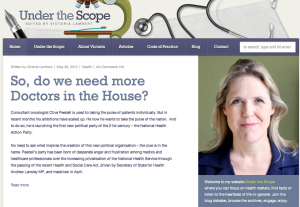 Under the Scope features blog posts, articles and features on topics ranging from specific conditions to general health stories and product reviews. The site is published by Lambert’s own media company Dysart Press Ltd.

Speaking of her motivation for the site, Lambert said:

I wanted to set up a website where people could go for information, to talk about health, to discuss what’s going on with their own health, perhaps to discuss what’s going on with the nation’s health. I want it to be a place where people can think about the NHS, what’s happening to it and what they think should happen to it. But I also want to be a resource where people can go and enjoy reading about health stories, find new information, find out about products, find out about doctors, and also find out where to go for more information because that’s really crucial.

There are plans for a series of web-only video interviews with world experts on a range of medical conditions:

I’ve just been speaking to Professor Lord Ajay Kakkar who is director of the Thrombosis Research Institute and professor of surgery at UCL and he’s been telling me about thombosis, he’s one of the world’s experts. To get the chance just to have five minutes with him is so fantastic and I just think it’s great to be able to share that.

Lambert insists her readers and Twitter followers will have a big part to play in the future of the site:

Everyone who knows me knows I like a chat, I love a conversation. So I’m encouraging people to chat to me across the forum, keeping chatting to me on Twitter. We’ll be blogging every day, if not me, somebody else will be having a shout about something. I really want people to join in, that would be good fun.

In the long-term I’d like to think that it’s going to a place not only where the public come but also health experts and also become a place where other health journalists want to put their stories.

Lambert’s work has featured in the Daily Telegraph, Daily Mail and the Guardian as well as Woman & Home and SAGA magazine. In 2011 she was recognised as Best Cancer Writer by the European School of Oncology.

Those nominated are as follows – the comments on individuals come from Mind’s awards team:

Mind Journalist of the Year Award
Edward Davie, British Medical Association News
“Edward Davie submitted a series of articles on the issue of private healthcare providers refusing to treat NHS patients with psychiatric conditions. Davie’s articles were noteworthy for the depth of personal investigation involved and the clarity with which he highlighted this tricky area.”

Nick Morrison, the Times Educational Supplement
“Nick Morrison demonstrates a deep understanding of stress and mental well-being at work in a feature on the mental health of teaching professionals. Packed with first-hand experiences of teachers from all walks of life, this honest account is a wake up call for the education sector.”

Alexi Mostrous & Ben Macintyre, the Times
“In a frank and exposing article Alexi Mostrous and Ben Macintyre investigate mental health problems such as post-traumatic stress disorder among current and former soldiers, and present revealing insights from ex-service personnel who have experienced mental distress.”

Barry Nelson, the Northern Echo
“Local journalist Barry Nelson writes on topics ranging from stigma and PTSD [post-traumatic stress disorder] to the use of art therapy as a mental health treatment, showing the many ways in which mental health can impact upon people’s lives both directly and indirectly.”

Deborah Orr, the Guardian/G2
“Deborah Orr recounts her experiences shadowing professionals involved in sectioning patients under the Mental Health Act, producing a sobering take on the challenges faced daily by mental health workers and the realities surrounding the process of admission to psychiatric care.”

Max Pemberton, the Evening Standard and the Daily Telegraph
“Max Pemberton’s columns explore the stigma and misunderstanding that still persists around mental health. A doctor as well as a journalist, Pemberton presents different perspectives and incites readers to think differently about how subtle mental health discrimination can sometimes be.”

Patrick Strudwick, the Independent
“In an in-depth investigative feature into the world of straight-to-gay conversions where homosexuality is seen as a mental health problem, Patrick Strudwick challenges the reader with controversial questions such as whether tighter regulation of counsellors and psychotherapists is necessary to protect the public from abuse at the hands of therapists.”

The Bill and Melinda Gates Foundation is helping to fund better coverage of world health issues by news outlets.

The foundation has made a series of million-dollar grants to organisations including WGBH in Boston, Public Radio International and the International Center for Journalists.