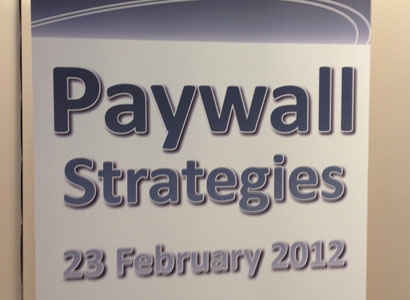 The journey from print to digital is “a bit like making trains that float, in case they need to go back on the canal,” Steve Hewlett, Guardian columnist and presenter of BBC Radio 4’s Media Show.

His analogy came at the opening of today’s Paywall Strategies event, which Hewlett is chairing.

Three niche publishers spoke on the panel, along with Tom Whitwell from the Times.

“We have sought to provide bloody fantastic content. That’s our paywall strategy,” he added.

Lloyd’s model is a high-price subscription which companies pay, providing access for their employees.

A huge focus for the Lloyds List Group is the merging of data and journalism. Smallman illustrated how data led to a story which saw him interviewed on each major US network after last month’s sinking of cruise ship the Costa Concordia.

Data collection meant Lloyds was able to report that the ship had previously come even closer to the island off which it sank, coming within 230 metres of land last year.

Another niche publisher on the panel was Incisive Media, which owns a range of specialist titles.

Jon Bentley, head of online commercial development, said 65 per cent of people who come to Incisive sites never come back. “Therefore focus on your fans who do return,” he recommended.

And those who do not return look at just 2.6 pages per visit, compared with 7.11 pages viewed at by “customers”.

Their aim is therefore to convert readers from “fly-by to fan”, Bentley said, explaining it can be tough with just 5 per cent taking up a trial.

“Our paywall has saved us as a business,” he proclaimed.

After trialling a free model and a hard paywall, they have settled on a “freemium” option, with some free content and readers asked to ay £5.50-a-moth for additional content. Those who buy the magazine get a digital subscription included.

So what will people pay for? “Words and pictures – and it is all ad free,” he explained.

Just 1 per cent of readers pay to access content, but those account for 11 per cent of site traffic. “They are loyal, they are engaged,” Aherne added.

The motorsport titles break news outside the wall, but provide content for deeper engagement behind the wall.

Readers subscribe because “they want to know more than the bloke next to them in the pub,” Aherne said.