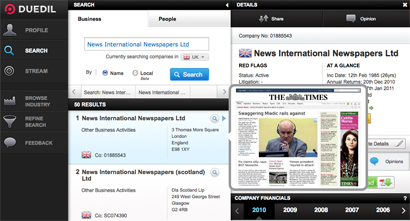 Benjamin Cohen, technology editor at Channel 4 News, has blogged about the experience of being sent the latest, personalised edition of Wired magazine.

Well, personalised for some. “Opinion formers” around the UK have been sent a copy of Wired, titled “Your life torn open”, with personal information about them splashed over the front cover. Cohen was shocked by the information that they printed – and it is shocking at first. But then it is all publically available through Facebook, Twitter, Companies House and the Land Registry.

What’s shocking though is seeing all of this printed in black and white (or yellow in this case). Everything was available from Facebook, Twitter, Company House and the Land Registry but it shows the information is so readily available. It also shows how powerful these resources can be for private detectives or government agents.

Government information architect Martin Belam has an interesting post about some of the limitations of the recent government data release, particularly the difficulty of – and cost associated with – cross-referencing the data with Companies House records.

Using the Guardian’s data explorer tool, you can get a comprehensive list of suppliers. Wouldn’t it be wonderful if you could instantly cross-reference that with the records at Companies House?

I’d love to be able to get an instant snapshot of how many of these companies are large, medium or small enterprises. Over time you could use that to measure whether the intention to open up Government service tendering to wider competition was on track or not.