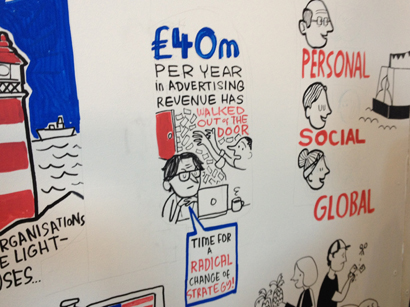 Alan Rusbridger, editor of the Guardian, today asked readers what they were prepared to give back to the news group in return for journalism: money, time or data.

The first option, to ask readers to pay for an online subscription, “has not been ruled out”, Rusbridger told a session called “what might the Guardian’s future look like?” at the Guardian Open Weekend.

He suggested readers could give their time, perhaps volunteering to work shifts when they would moderate comments from fellow readers, a suggestion that is perhaps equally as surprising and seemingly unlikely as the idea of the Guardian putting up a paywall.

The third option Rusbridger proposed was that readers share personal data, such as their postcode.

All three options aim to make or save money, helping to compensate for the “£40 million-a-year which walked out the door” with the rapid decline in newspaper advertising.

You have to work on the basis that [revenue] is never going to come back.

There are huge opportunities for journalism but it’s going to be a period of intense change.

In the same session, Andrew Miller, CEO of Guardian Media Group, explained the group is focussing on brand building, saying sustainability via digital relies on far more than “banners and buttons”.

The newspaper is fantastic product but is one of many products that people use to consume news.

Miller commented on the revenue generated by the Guardian’s Facebook app, launched in September – which has been downloaded by eight million users in six months and which saw Facebook users read 19 million articles via the app last month – saying “we only make a few hundred thousand pounds” via the app.

Earlier this week Journalism.co.uk reported that the Guardian app has generated more money than it cost to build.

Also speaking in the session was Janine Gibson, editor-in-chief of the Guardian US operation who seven months ago “took the Guardian-ness and put it in America”.

She talked about how the “audience is growing substantially” in the US.

We are trying to make [the audience] feel they are part of the international army of Guardian readers.

7 thoughts on “Rusbridger: Guardian paywall ‘has not been ruled out’”