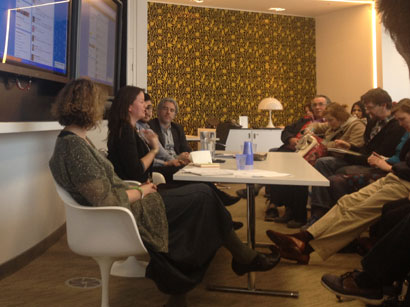 A community of commentators provides the Guardian storytelling process with “cross-fertilisation from below the line”, David Shariatmadari, deputy editor of Comment is Free (CiF), the Guardian’s comment, analysis and discussion platform, told readers at the Guardian Open Weekend event today.

In a session called “digital revolution: how publishing is becoming collaborative”, Shariatmadari explained how 400 non-Guardian staff are commissioned to contribute to CiF every month.

In addition to commissioned commentators, a post-moderated commenting system,  and reposting content from niche blogs, the “opening processes” provided by social media results in “unearthing unexpected gems from the readership”.

“It’s difficult to say where the future of digital collaboration might go next,” Shariatmadari said, but feels “moderation will always be necessary”.

The Guardian trys to reduce the need by moderators by “managing the conversation”, with journalists, community coordinators and moderators joining the debate.

Laura Oliver, a community manager who is one of those “embedded” within the news room and areas such as CiF,  works to reduce the need for moderation by encouraging a healthy community of moderators.

Oliver sees her role as to represent and be the “voice of the reader”, encouraging a “two-way conversation” and broadening the overage.

Once a story is published, that’s not the end of it as that’s where the readers come in.

The Guardian wants to build a returning community, Oliver said, beyond asking readers to “send in pictures of snow”.

She gave the example of ensuring the team “connected” with those contributing from North Africa during the height of the uprisings and ensuring those commentators “would come back to us”.

She also highlighted the collaboration from readers and expert commentators during the daily blog on the Health and Social Care Bill, run during the debate around the amendments to the bill, the pause and its passage through parliament.

Claire Armitstead, literary editor of the Guardian, talked about crowdsourcing and call outs for reader responses and how they influence the sections such as Books.

What this new journalism has opened up is new ways of responding to criticism within the arts.

Dan Roberts, national editor of the Guardian, the chair of the debate, explained how his team started trying to capture witnesses to events, harnessing citizen journalists, and has evolved into opening up to publishing the daily newslist.

The idea is that publishing the list encourages feedback, Roberts said, “in the hope we get some advice and help”.

That way we know that we are chasing the things that readers care about.