Tool of the week: Cuttings.me

How is it of use to journalists? Cuttings.me was built by freelance journalist Nicholas Holmes who wanted a way of presenting links to his best work. 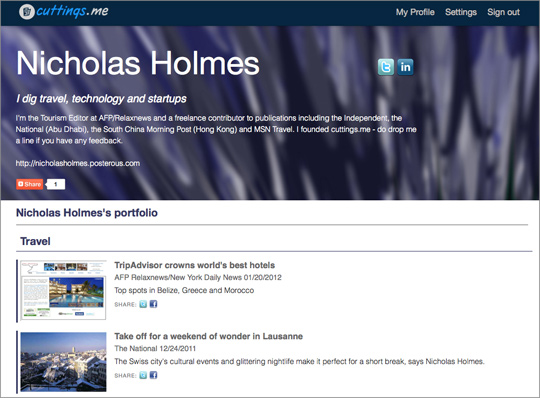 Launched in October, Cuttings.me now has thousands of links and is being used by journalists from the BBC to the New York Times to Al Jazeera. You can see Nicholas Holmes’ portfolio at Cuttings.me/nicholasholmes.

Last week it was been adapted and redesigned with the help of feedback from other users.

As of this today, Cuttings.me has a “multimedia clippings” feature, which opens up Cuttings.me for broadcast journalists too.

Another feature released today is RSS, allowing anyone who wants to subscribe to a feed of your best work to have an easy way of doing so.

RSS was “one of the most-requested features since the redesigned site launched late last year”, according to Holmes, who is is tourism Editor at AFP/Relaxnews and a freelance contributor to other publications including the Independent.

It’s quite a major upgrade and means users will be able to activate a personal RSS feed of their work, allowing them to easily export their cuttings to sites such as Facebook and LinkedIn to ensure all of their contacts are kept up-to-date, whenever they add a new piece to their Cuttings.me page.

A short video on how to get started with Cuttings.me is below.