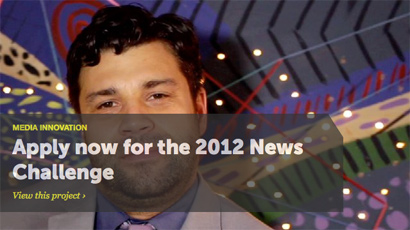 The competition, which is open to “anyone – businesses, nonprofits, individuals” has been redesigned, split into three shorter, more focused rounds instead of one bigger annual award, as announced by the Knight Foundation at the World Editors Forum in Vienna last year.

The theme for the first round is “networks”. Entries will be accepted until 17 March and winners will be announced in June.

The most common question I’ve been asked since we announced the challenge is exactly what we mean by “networks”. We’re trying not to define the term too narrowly, but I thought a look at David Sarnoff, the creator of the broadcast network in the US, might provide some insights into our motivations.

In the 1950 film Mid-Century: Half Way to Where?, Sarnoff foresaw the coming “pocket-sized radio instruments [that] will enable individuals to communicate with anyone anywhere”. According to Cisco, the number of those “pocket-sized instruments” will equal the number of people on the planet by the end of the year … Today’s communications networks are different from the broadcast tower and its one-to-many reach. The internet, and the mini-computers in our pockets, enable us to connect with one another, friends and strangers, in new ways. Witness the roles of networks in the formation, coverage and discussion of recent events such as the rise of the Tea Party, flash mobs, the Arab spring, last summer’s UK riots and the Occupy movement.

We’re looking for ideas that build on the rise of these existing network events and tools – that deliver news and information and extend our understanding of the phenomenon.

A second round, to be held in the spring, will be an open competition, looking for new ideas broadly. The theme for the third round has yet to be determined.

The Knight News Challenge is run by the John S. and James L. Knight Foundation and awards funding to innovative ideas for techniques and technologies which engage communities with news and information. Since 2007, Knight has invested more than $100 million (£63 million) in new technologies and techniques.

You can apply for the challenge here.