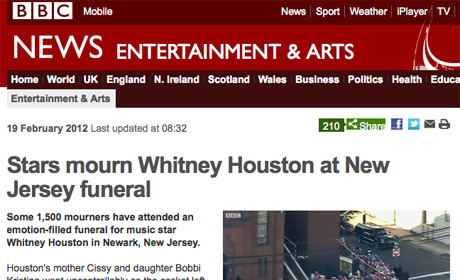 The BBC has issued a statement in response to complaints about the length of its live coverage of Whitney Houston’s funeral service.

The broadcaster reports that it received 118 complaints about its live coverage of the 3 and a half-hour service, which appeared on the BBC News channel.

Live coverage of the service began at 17:00 GMT and continued until just before 20:30 GMT, with the BBC continuing to report on the story afterwards.

In a statement, published by the BBC, the broadcaster said the coverage “reflected the significant interest in her sudden death as well as acknowledging the impact she had as a global recording artist”.

It acknowledged that “some people felt there was too much coverage” but said BBC One’s teatime bulletin, radio bulletins and other services had still given viewers “the best access to the day’s other news stories”.

One thought on “BBC: Whitney Houston funeral coverage ‘reflected the significant interest’ in her death”