Press officers have long relied on databases of journalists in order to approach them for stories. PRs are now increasingly targeting bloggers, recognising their reach. One start-up has seized on this trend, creating GroupHigh, “a research engine” which crawls 1.3 million blogs in real-time.

Launched in April 2011 in Boulder, Colorado, the software allows PRs to search by keyword, location and blog traffic.

Listed in the Next Web’s top 20 social media tools of 2011, GroupHigh gets a ringing endorsement.

13. GroupHigh.com – If you haven’t tried GroupHigh yet, the next sentence might encourage you to do so. Ready? GroupHigh.com is the best blogger outreach research and engagement tool on the planet. The latest update (version three) makes it even easier for you to discover the most relevant blogs by keyword, style and receptiveness. Brilliant.

PRs who pay for access can ask the database for “a list of every mum blog out there”, co-founder of the start-up Bill Brennan told Journalism.co.uk. You can then ask the software to “tell me the ones that have written about baby formula or home schooling in the last year”.

When I tested the software and searched for “UK bloggers”, left-leaning political blog Liberal Conspiracy was listed at number one (see screen shot below). 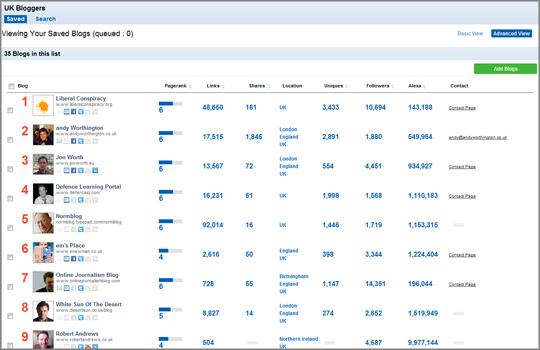 Users can also filter by page rank, Facebook shares or Twitter followers and export the data to Excel.

We’ll probably add contacts for individual bloggers at each blog as part of version four.

GroupHigh is the co-founders’ second start-up. Their first foray was recipe search engine Recipe Bridge, which they sold to an Australian ad network.

Confident in their ability to build software to crawl the web and realising “it’s difficult to make money [from] advertising”, the pair “started to tap into the blogosphere”, Bill Brennan said, noting a changing trend within the PR industry.

It seemed like blog outreach was really becoming a staple of campaigns for their clients.

Brennan added that PRs were finding the big bloggers, such as TechCrunch, but “they were not tapping in to what we call the ‘magic middle'” of less well-known blogs.

The cost of using the software is likely to preclude bloggers from satisfying their curiosity and checking if their site is crawled. An annual GroupHigh licence for PRs costs $3,000 (£1,926), plus $1,000 (£642) for each additional user.

Below is a video demo of how GroupHigh works.

2 thoughts on “Is your blog in this PR database of 1.3 million blogs?”