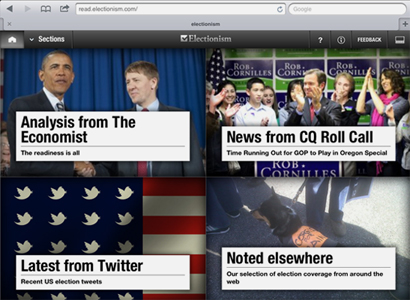 The Economist has launched Electionism, an HTML5 web app for tablets, focusing on the US election.

Publishers will be interested to note the development of an app that works across a range of tablets, including the iPad, Galaxy Tab and Kindle Fire (yet to be released in the UK), and will also soon be available on the Blackberry PlayBook.

Rather than being downloaded from an app store, it is accessed by following a link in the tablet’s web browser.

Although designed for tablets, a simple version of the app works on mobile, presenting a Tumblr blog-style format (indeed, the app is “powered by Tumblr”).

This is the the Economist’s first foray into a web app that will work across several devices, unlike its range of apps native to Android and Apple’s iOS. 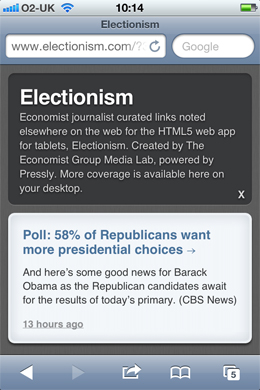 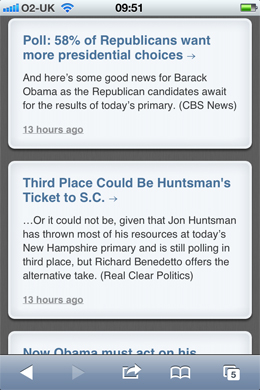 Electionism includes content from the Economist, CQ Roll Call and other noteworthy election reports from around the web.

Tom Standage, digital editor of the Economist, said in a release:

Electionism combines the Economist’s day-to-day opinion and commentary on the US elections, from our Webby-award-winning Democracy in America blog, with detailed on-the-ground coverage from CQ Roll Call and our picks of the best election coverage from elsewhere on the web, all wrapped up in a tablet-friendly format.

It is extremely important to us that we provide our readers with not just commentary and analysis, but also the opportunity to discuss and debate the key issues. By building content sharing functionality through Facebook, Twitter and email into the Electionism app, we have provided readers with the ability to engage others in a conversation around the election.

Electionism was created by the Economist Group Media Lab, an internal product innovation group, and built in conjunction with its Toronto-based technology partner, Pressly.