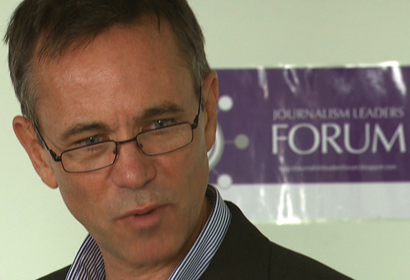 Joseph Stashko is a journalism student at UCLan and co-editor of hyperlocal news site Blog Preston.

So, you’re studying journalism at university. You’ve paid your fees, bought a copy of McNae’s law, and at the end of three years slogging away at intros, pyramid writing and shorthand, you’ll become a journalist, right?

Obviously it’s a naive and unrealistic view. Getting a job in journalism is more difficult now than ever. And yet the industry saw a 24 per cent surge in applications for journalism courses last year, many of them undergraduate. Clearly people still want to be journalists, and the idea of a vocational degree is still considered attractive.

The University of Central Lancashire, home to the first formal journalism course in the UK, currently offers more than 20 undergraduate and postgraduate courses. It has legions of journalism students at various stages in their career, with a wide range of skills and ideas. Yet the student newspaper, Pluto, is run by a skeleton crew.

Pluto’s news editor David Stubbings is hoping to hoping to refresh and improve student media at UCLan by redesigning the fortnightly paper and website and improving the means of communication to students.

“I think a lot of students arrive at university very excited and want to try and do everything. They’ll maybe write a bit but then just lapse and do the bare minimum, especially in first year,” he said.

He pointed out that the blame for a poorly staffed student media also lies with the editors, who should be encouraging more students to participate to avoid an elitist environment.

“Those who are heavily involved must make an effort to attract more contributors and crucially keep them interested. I think there are a lot of students who fail at doing that, so when you see the same writers names appear again and again people start to think that there’s no point trying to get involved.”

The outlook is, admittedly, bleak for nascent journalists. With all that’s written about mass redundancies, newspaper profit going into freefall, and seasoned journalists being laid off, you’d forgive a journalism student for wanting to crawl back into halls and stay there.

But I’d suggest the opposite. Student media, if done well, can offer a forum to throw around ideas (no matter how far-fetched), collaborate with like minded people, and practice journalism that is probably far closer to the romantic ideal of a roving reporter than any entry level job.

Journalism students have a lot to offer in an industry that is constantly in a state of flux. While interning at a national newspaper, I recall pointing out to a senior editor how to integrate his articles into Twitter, engage the readers and help tell a story better with data visualisation and diagrams. Skills which my generation take for granted are still thought of as innovative by many senior journalists, and what students lack in experience they can make up for with imagination and a little creative nous.

Student media can, and should foster this. At worst it can be self indulgent, and have the best interests of its writers, not its readers, at heart. But at its best it can be a melting pot of new ideas, encouraging experimentation and unusual content, all the while in the stable incubation stage of higher education.

In this uncertain time, journalism students can hold the key to unlocking a lot of different possibilities for the future of the profession. So lose your inhibitions, put down your pints, and get involved in your student media.

A call to all journalists who have left newspaper jobs: Journalism.co.uk’s survey in collaboration with the University of Central Lancashire (UCLAN) continues. We’ve had a good response so far, but we still need more data to make for a more informed study. Since we launched the project, even more UK redundancies have been announced; this week, for example, 17 were cut by Trinity Mirror (this time in Merseyside). Please help us by re-tweeting, blogging and forwarding the survey links to people you think may have been affected by the newspaper jobs cull sweeping Britain.

In a break with the traditional conference format, Open09, a new event from the University of Central Lancashire (UCLAN), will let attendees set the agenda beforehand.

The free event aims to ‘explore, inform and create change in the Digital and Creative industries sector’ by running a series of group discussions and barcamps on relevant topics, including media and journalism.

The event is sponsored by the BBC College of Journalism and will take place between Novermber 16-17 at UCLAN’s Sandbox facility.

@journalism_live, amongst others, will be tweeting coverage from today’s Digital Editors Network event and Journalism Leaders Programme Forum hosted by the University of Central Lancashire (UCLAN).