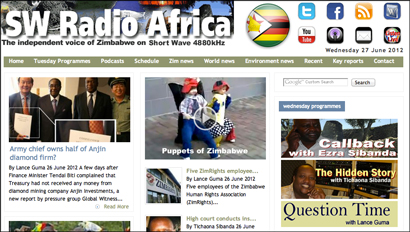 After being fired from one job and finding her house surrounded by Zimbabwean paramilitaries six days after she set up Capital Radio and aired a test broadcast, Gerry Jackson then launched SW Radio Africa.

Jackson spoke of the human rights abuses, corruption and repression in the country, and how the radio station and SW Radio Africa website aim to expose wrongdoings.

She told the conference that Zimbabwe is “trapped” as “nothing changes”.

We are groundhogs [like in the Bill Murray film Groundhog Day]. We are reliving the same day over and over. That’s what it feels like in Zimbabwe.

But although we are groundhogs and do the same stories over and over again, we do highlight stories that rest of the world doesn’t seem pick up on.

Jackson is particularly proud of the radio station’s exposes. The website published a leaked list of the names of 450 individuals who had allegedly committed acts of violence.

The expose received a “huge response on Facebook”, Jackson said. But explained that “people were very frightened to write publicly” so instead messaged the journalist who worked on the story to report details of further atrocities.

The reporters at SW Radio Africa also arrange most of their interviews via the platform. They are also aware that the ruling party “keeps a close eye on Facebook”.

Jackson said around one million people in the country of roughly 12 million are on Facebook, with two million internet connections and nine million mobile phones with 700,000 of those being used for internet access.

It’s impossible to underestimate how much Zimbabweans love Facebook.

She said that not only includes those within the country but Zimbabweans living in exile, which is perhaps one third of the total population.

And key political figures are on Facebook, including members of the Zanu-PF party.