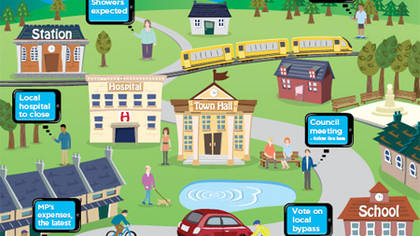 A hyperlocal initiative from the National Endowment for Science, Technology and the Arts (NESTA) has seen over 165 applications made for its pot of £500,000 in seed funding. Applicants face stiff competition as only 10 will receive the money and guidance from the charity and its partners.

The Destination Local project aims to stimulate the hyperlocal media sector with innovation in mobile and location technologies. As Journalism.co.uk reported last month the charity produced a 15,000 word report on its vision for the future of hyperlocal media in the UK. The report highlighted the penetration of GPS capable smartphones as a key innovation opportunity for hyperlocals.

NESTA say it is encouraged by the number of applications received for the project. Director of creative economy programmes Jon Kingsbury told Journalism.co.uk:

We are never really sure (of the the level of interest) when we have a call for funding but I’m really pleased with the number of applications. It demonstrates that there’s some demand and willingness in hyperlocal to be innovative and sustainable.

He said he is also pleased by the range of applications they have received:

What we are looking at is a broad mix of hyperlocal services. There is the provision of news and information but also other ways of benefiting communities with mobile and local technology such as local service provision.

One of the applicants, Simon Perry of VentnorBlog, says the competition has created a lot of interest among hyperlocals:

It has stimulated a lot of thought, people had to think a lot when putting their bids in. I know when we were going through ideas we went through various iterations before we decided on the one for our bid. I think it has really stimulated the market just by having the competition. It’s got people thinking ‘ok, what are we going to do with mobile?’

The Destination Local judging panel have until 28 June 28 to sift through the applications to select the 10 projects who will be eligible for the £50,0000 funding.