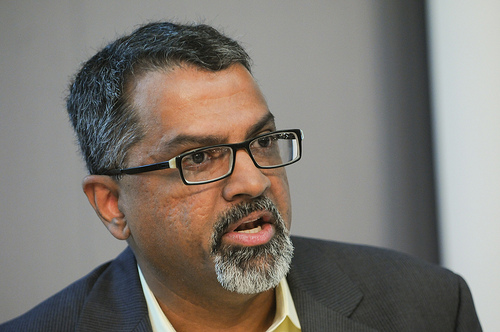 Raju Narisetti from the Wall Street Journal, pictured speaking at the news:rewired conference, earlier this year

Speaking at the World Editors Forum on Monday (3 September), managing editor for the Wall Street Journal’s digital network Raju Narisetti said he had concerns about many US “copycat” paywalls, and whether they would be able to generate the necessary revenues to succeed financially.

Instead, he predicted that “the golden age of digital advertising lies ahead of us” and that by “running towards paywalls” news outlets may be missing the challenges of the future, such as the mobile consumption of news and the need to produce content which can travel with its advertising to platforms outside the news outlet’s own.

I caught up with him after the session to speak to him more about his views on digital business strategy, “copycat” paywalls, and why he thinks smaller news brands shouldn’t be “throwing the advertising baby out with the bathwater”.

I think most US metro papers are looking at the New York Times and saying let’s follow their model, whether it’s 20 free stories or 30 free stories, it’s a metered wall, and I think the New York Times has seemed to have pulled it off but I think a lot of smaller papers will find that the content they have is not going to be enough for people to want to pay.

News outlets should instead be asking “how should I expand the pie?”, he said. Narisetti added that part of the opportunity in the digital advertising business will require news organisations to do more to understand audience interactions with adverts.

As an industry we know our readers very well, we know what they do what, what they read, where they come from. Why is it that we haven’t invested enough to know how they interact with advertising and taken advantage of that?

He said some news outlets have “abdicated the responsibility of understanding their advertising behaviours and then taking advantage of that”.

Instead, “we’re just selling eyeballs as opposed to selling our knowledge of our reader behaviour”.

We know so much about what they consume … why don’t we know what advertising works for our readers then? We’ve just ignored that.

So why does he think news outlets without that are moving in the paywall direction? Factors include a “me too” mentality, he said, where news outlets see another succeeding and want to try it too, in other cases it may be seen as a “defensive mechanism”, he said, “to say it will stop people migrating from our print to our website”.

But this could be missing a bigger issue, he warned.

While we’re all on a journey of different speeds on, say, this information highway, there’s probably going to be a big mobile wave coming behind that will put all of us in a relatively level playing field. How do you monetise mobile… how do you create stickiness, is something we should be thinking about now rather than worrying about our website which are increasingly seeing fewer and fewer people come.

… I’m not sure we’re going after the right set of problems.

The Wall Street Journal “never gave its content away for free”, so it does not face the challenge he has highlighted for others of trying to charge for content that was once free. And of course other paywalls are also seeing success, but his argument is that digital advertising is far from being fully maximised and paywalls should not necessarily be the first answer for everyone.

If you have a paywall that’s working, more power to you, but if you’re going to jump in feet first or head first, think a little about what’s going to work rather than just saying the [New York] Times is doing it, let me follow.

“Numbers are everything to our business” – this was the message from Washington Post‘s Raju Narisetti, speaking today at the BBC’s social media summit.

Narisetti outlined the “simple mission” for news organisations to have more people to engage with more of its content, and this is achieved through data – both numbers and importantly, context.

We’ve moved from our anecdotal newsroom to a newsroom where there’s a lot more data, a lot more measurement. Initial measurement was page views, but we very quicky realised we need to move to a world of context.

Data is not just about measuring eyeballs – it is a valuable resource in making decisions. You’re able to show with some data things we can stop doing, Narisetti said, without making an impact on the readership. This he said makes an “accountable newsroom” and creates an environment which is a lot more encouraging for digital journalists where they know the impact of their work.

Also speaking on the panel, which covered the cultural challenges for newsrooms trying to encourage the effective use of social media, was the Guardian‘s Meg Pickard.

She revealed that research by the Guardian has shown that when a journalist gets involved in the conversation online it halves the moderation need and the tone of the conversation “goes up”. This is a key example of such data being used to support proposals and ideas.

As for the culture of the newsroom the Guardian wants to focus on people and skills, she said, to “create a fertile medium” across the organisation and then trusting staff to “act as the intelligent adults that they are” and apply their best knowledge and judgement to the situation.

But, she added, there’s no point in forcing anyone to be active on Twitter from the get-go.

We should not be forcing someone to Tweet, it will be obvious, they will be grumpy and won’t know what they’re doing. So I don’t think on your first day when you’re handed an email address they should be told that you’re free to say anything you like about our brand to the world.

Within the first few months I would try and encourage them to do so, but by demonstrating opportunities to build the community and relationship with audience.

Journalism.co.uk’s own digital journalism event news:rewired – noise to signal, which takes place on Friday next week at Thomson Reuters, will dedicate an entire session to the issue of audience data in informing editorial and business decisions for news organisations. You can find out more and buy tickets at this link.

Last week, the Washington Post issued a new social media policy, to deal with its journalists’ use of individual accounts.

Raju Narisetti, one of two managing editors, took the decision to close down his Twitter account, after the views expressed in some of his tweets were called into question.

paidContent has got hold of the full text of the social media guidelines:

Two new managing editors have been named at the Washington Post: one of them is a the first woman in the role in the paper’s history. Full story…