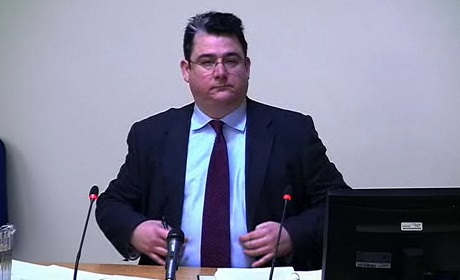 Political blogger Paul Staines has called for parliamentary lobby briefings to be televised – and called the current system “a cartel”.

Giving evidence at the Leveson inquiry this afternoon, Staines, who runs the Guido Fawkes blog, said the current system of accreditation and access for parliamentary journalists was antiquated and “unhealthy” for transparency.

“It’s a cartel,” he told the inquiry.

The authorities in parliament won’t give you access to the parliamentary estate unless you’re on the lobby list. I have to go into parliament as a visitor. It makes it difficult for me to get access to the main players.

I don’t think it’s a very healthy system. Former chairmen of the lobby have said its antiquated.

Downing Street sources normally means the journalist is in a briefing room, being fed the line. Just put it on TV.

The lobby functions like an obedience school for journalists – play the game and we’ll reward you. If you rock the boat you won’t get access.

During his appearance at at the Leveson inquiry, Staines also repeated a claim he made on his blog that Tina Weaver, editor of the Sunday Mirror, knew about and authorised phone hacking and blagging.

So, as Matt Wardman noted on this blog today, bloggers are soon to be allowed into parliament. But who will be the first?

Mark Pack says he hears that passes are “on their way” to the Guy News TV team: “It’s an off-shoot of the Guido Fawkes blog though, unlike the blog, the online TV show becoming legally based in the UK. Even so, given its very irreverent attitude to politics, this is a move that isn’t being met with universal adulation from the existing lobby members.”

Journalism.co.uk dropped a line to Guido himself: “I have not applied for a pass,” is the quick response.