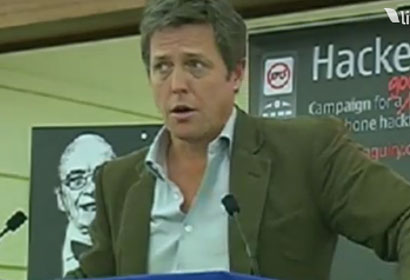 Written witness statements submitted as part of the Leveson inquiry have been released.

Submissions from those who gave evidence to the hearing yesterday (Monday 21 November) are now on the Leveson inquiry website.

Journalism.co.uk is providing full coverage of the Leveson inquiry. News and reaction from the last 24 hours:

Actor tells Leveson inquiry that story published by Mail on Sunday could only have been obtained by phone hacking, a claim disputed by counsel QC Robert Jay

Mail titles hit back at Grant over ‘mendacious smears’

Mail on Sunday denies claims by actor Hugh Grant that it hacked his phone in 2007, calling his allegations ‘mendacious smears driven by a hatred of the media’

The revelation appears in an article Grant has written for the New Statesman, which is guest-edited this week by the actor’s former partner Jemima Khan.

Grant, who believes he was himself a victim of phone hacking, ended up talking to McMullan when his “midlife crisis car” broke down in a Kent village just before Christmas and he was forced to accept a lift from the reporter, who was following him.

He was Paul McMullan, one of two ex-NoW hacks who had blown the whistle (in the Guardian and on Channel 4’s Dispatches) on the full extent of phone-hacking at the paper, particularly under its former editor Andy Coulson. This was interesting, as I had been a victim – a fact he confirmed as we drove along. He also had an unusual defence of the practice: that phone hacking was a price you had to pay for living in a free society. I asked how that worked exactly, but we ran out of time, and next thing we had arrived and he was asking me if I would pose for a photo with him, “not for publication, just for the wall of the pub”.

I agreed and the picture duly appeared in the Mail on Sunday that weekend with his creative version of the encounter. He had asked me to drop into his pub some time. So when, some months later, Jemima asked me to write a piece for this paper, it occurred to me it might be interesting to take him up on his invitation.

So Grant returned to the the Castle Inn Pub in Dover wearing a hidden microphone, and the fruits of his chat with McMullan will be published in this week’s New Statesman. An edited version is at this link.