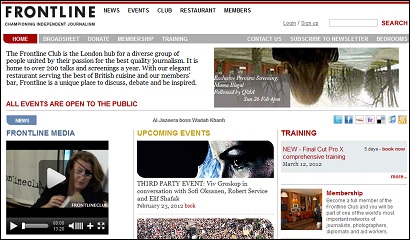 The founder of the Frontline Club, Vaughan Smith, is asking freelance journalists around the world to take part in a survey about the physical risks of their work.

The survey is aimed at freelance camera operators, video journalists, photographers, stringers and other independents anywhere in the world.

I believe that there is an opportunity, post embed-free Libya, for a practitioner-led initiative to move the industry forward on news safety.

In April this year the Frontline Club will host workshops, bringing management, practitioners and freelances together to discuss the issues.

It is my view that freelance interests have suffered in the past for lack of representation. Opinions on these matters outside the mainstream are broad and no freelance can confidently speak for another.

I intend to take a first step to address this by using the data from this survey to inform the debate on safety. The results will be published but not the names of any contributors.

The survey, which should take no more than 10 minutes to complete, can be found at this link.

An update from Press Gazette on the libel fight of freelance journalist Hardeep Singh, which reports that the freelancer is being represented by high-profile law firm Carter-Ruck – better known for its work elsewhere…

In October the High Court in London granted Indian national His Holiness Sant Baba Jeet Singh ji Maharaj the right to appeal in his libel case against Singh.

Singh was sued by His Holiness Sant Baba Jeet Singh ji Maharaj, the head of a fringe Sikh religious institution, for an article published in the Sikh Times in 2007. The piece written by Singh called Jeet Singh “an accused cult leader” and alleged that his teachings were not in line with mainstream Sikh doctrine.

The case was thrown out by Justice Eady in May 2010, who ruled for a permanent stay with no right to appeal. In May Singh said the case had already cost him “in excess of £90,000”.

Full story on Press Gazette at this link…

Who? Editor and freelance writer

What? Was editor of the Tokyo Weekender; took six months out travelling and blogging her way back west; now back London to join the ranks of journalists seeking a job.

Since my last blog I’ve been on a press trip with other freelancers, which is something I’d whole-heartedly recommend. To be in the company of others such as yourself, and share stories about late payments, vague commissions and (grippingly) how to fill out tax returns, is a massive comfort.

Or it is to me anyway, who is finding the isolation one of the hardest things about freelancing. Not having anyone there to look forward to lunch with, or a fellow soul to share tea-rounds with is tough. Not to mention the lack of the sorely missed ‘post-work drink?’ offer or someone else to get excited about a story with.

But it wasn’t just the camaraderie that made the trip worth it – I got some interesting inside info on which editors are taking freelance commissions at the moment, who pays on time and who to avoid.

Something strange seems to keep happening to me in my new guise as a freelance. It’s crippling writer’s block, (though some might call it internet-abetted procrastination) which usually sets in during the last few acceptable working hours of the day.

It’s happened thrice now, me filling my creatively-stumped time with Twitter conversations (does virtual networking count as work?) or chuckling at Charlie Brooker.

Then suddenly, I’ll get a burst of inspired motivation, or a profound idea, just as my housemates burst through the door with that end of the day, ‘so-glad-to-be-home-and-crack-open-the-red’ gusto, flinging open the door to our communal lounge to find me hunched and furrow-browed over my laptop positively scowling at the interruption.

While I’m not drowning in commissions, I’m starting to get somewhere with some magazines, and I’m finding that websites and blogs are open to pitches and more likely to respond (though obviously less lucrative). One thing I’ve discovered, which has been incredibly handy, is going back over old features and finding a new angle and new market for them.

Taking a previous interview or idea, updating it, reworking it (obviously checking you’re not breaching any copyright agreements) and finding a specialist website or blog that is interested has made me a few extra quid here and there. It’s not enough to live off of course, but as it does for those smug, bum-slapping mums in the supermarket ads, when you’re freelancing in a recession, every little helps.

Rosie Birkett is a freelance journalist and sub-editor who specialises in food, hospitality and travel. She can be contacted on rosiebirkett1 at hotmail.com. She also blogs at thelondonword.com and at fiftyfourfoodmiles.wordpress.com. You can follow the series ‘Mad to start freelancing in the recession?’ series here here.

Despite all that stuff about English degrees leading to flipping burgers, after leaving university I had the good fortune to run my own magazine with friends while temping at a local TV channel and then to work as deputy editor for a regional magazine. Since graduating, I’ve managed to hold down full-time editorial roles.

Until that is, I moved to London, did a maternity cover stint at my dream magazine – spent five months making contacts, gaining industry leeway and vital experience – only to find there were no permanant jobs going at the end of it.

Luckily for me, my most recent employers have been kind enough to give me shift work (a godsend if you can get it), which has given me the security to make a go of freelancing.

And so, just as the country entered recession and editorial budgets everywhere were cut, I have been thrown into the world of freelance journalism.

Suddenly I went from the safety of the office, its databases, reputation and regular income, to the forlorn makeshift study in the corner of my communal sitting room (because who has room for an office in London?). It was time to abandon Outlook for Twitter and to change from being the one receiving, commissioning and yes, I’ll sheepishly admit, occasionally ignoring freelance pitches, to the one doing the pitching.

In this blog I’ll chart my progress as I endeavour to make a living (albeit a meagre one) off my own back, the freelance way.

It won’t be so much of a ‘how to start out as a freelance’, but more of a collection of stories, anecdotes, and hopefully a forum for people in a similar boat to share ideas, advice and opinion. Welcome to the world of the newbie freelancer.

So as the invites from PRs for lunches turn miraculously into ‘I’ll be at that canapé reception – catch you then’ and the chill-inducing tone of commissioning editors everywhere sings out bluntly ‘never heard of you’ – I’ll be sharing it here, with you, along with (hopefully) the odd triumphant tale of why freelance is the way to go…

Rosie Birkett is a freelance journalist and sub-editor who specialises in food, hospitality and travel. She can be contacted on rosiebirkett1 at hotmail.com. She also blogs at thelondonword.com and at fiftyfourfoodmiles.wordpress.com. You can follow all Rosie’s freelance updates here.