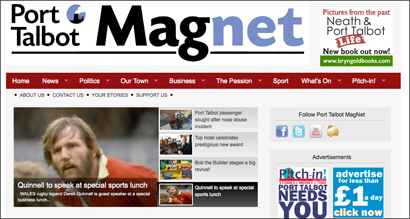 The Port Talbot Magnet, a hyperlocal launched by a group of journalists six months ago, has been asking the community to fund stories in an bid to make the site sustainable.

One of those behind the hyperlocal, Rachel Howells, told Journalism.co.uk:

Last month we launched Pitch-In! which was our call to the community, to let them know that we are here and that we want to collaborate with them and we want them to be a part of the news service.

Pitch-in! follows crowdfunding initiatives such as Spot.us, based in the US, in asking readers and interested parties to donate money.

The Port Talbot Magnet is asking the community to meet targets to “sponsor our football results service”, “help us buy public liability insurance”, “sponsor a court reporter for a day” or contribute to the development fund or offer general support. 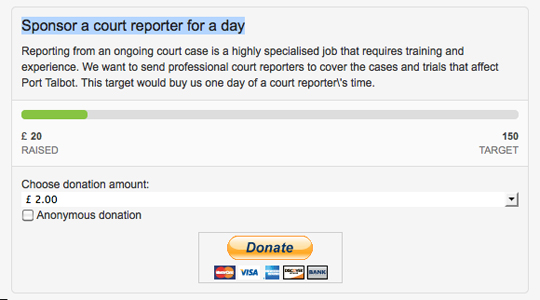 Howells, one of the directors of the Port Talbot Magnet, explained:

These are just a taste of what we would like to achieve. We have a long list of goals, including reporting council meetings and news, police and emergency services news, increasing our coverage of business news, sport, arts, music, entertainment, charity groups and campaigns – things we don’t have the resources for at the moment. And we are looking for local people to tell us what they would like us to cover, as well as giving journalists the opportunity to pitch in with ideas for investigations or news that they think should be covered.

A month on from launching Pitch-in! as a “call to community” and Howells said it has had “some success”, appearing to have generated around £40 in donations.

It’s a little more than we would have had if we hadn’t asked.

The Port Talbot Magnet is the result of cutbacks in South Wales and the closure of the Trinity Mirror-published Port Talbot Guardian, which shut in 2009.

A group of journalists, the majority of whom were members of the Swansea branch of the National Union of Journalists, started discussing how to “do something proactive to keep ourselves in journalism”.

Howells herself is former editor of Big Issue Cymru, who was made redundant when her job moved to Glasgow.

We could see there were changes in the industry that were particularly affecting Wales and that were affecting journalism generally.

As they were setting themselves up as a cooperative the group toyed with various ideas, settling for a news site for Port Talbot to fill the “natural vacuum” left by the closure of the local paper.

When the Port Talbot Guardian closed we just thought; here is a group of people who need local news, we are a group of journalists who want to provide it, surely there must be a way of filling the gap and creating some employment for ourselves as well.

The journalists’ joint effort developed into a local news site for the town of 35,000. Eight professional journalists are on the board of the Port Talbot Magnet, plus there are 20 “interested parties”, including academics and PRs.

The site launched in April 2011, in the same month as the Passion, a three-day play starring Michael Sheen, was performed in the local area and the hyperlocal became a community partner for the National Theatre Wales. Howells said this provided traffic and a “great test and great showcase” for the site.

Attempts to get public funding had proved unsuccessful, prompting the group to last month turn to community funding and also set up a membership scheme.

We can’t run it just as volunteers for ever, we want it to grow and develop, but we recognise that we can’t do it by ourselves.

Howells is hoping the community will answer the call, to subsidise the money generated through advertising.

Along with her role as journalist and director of the news site, Howells is also studying a funded PhD at Cardiff University, looking at what happens to a town that loses its local paper, the implications for democracy, and looking at possible sustainable business models. For obvious reasons her research is focused on Port Talbot.

Asked about her findings so far she explained it was too early to provide results from her research.

What I can tell you is that there were all these awful predictions that the number of local newspaper titles would drop significantly and that up until 2015 we were going to lose a percentage of them. This hasn’t happened at all and the number of closures has been minimal.

But underneath the surface though, when you look at the number of staff that have gone, if you look at how newspapers have merged with each other, the pagination of newspapers, there is an encroaching poverty in the newsgathering, particularly in this area.

Crowdsourcing website HelpMeInvestigate.com has launched probes into MPs’ campaign expenses. The move follows Channel 4’s investigation into Zac Goldsmith, who is alleged to have exceeded the spending limit set for his Richmond constituency.

So far, the focus has fallen on the closely-fought Edgbaston race, where Labour’s Gisela Stuart held her seat with a reduced majority of 1,274, but investigations have also begun in other Birmingham constituencies and in Brighton.

Posting on the HelpMeInvestigate.com blog, the site’s founder Paul Bradshaw said he was undergoing this investigation after Goldsmith and the Conservative Party claimed that they were justified in only accounting for election materials that were used in the campaign, as opposed to materials that were not used as they had become out-of-date.

“We want to see if this is true. Are other candidates not claiming for the expense of ‘unused’ materials? Or is Goldsmith an exception?” writes Bradshaw.

“We’ve started one investigation in Birmingham but would really welcome sister investigations in other towns and cities.”

The website is currently in beta testing, meaning new users can only access the site after requesting an invite.

HelpMeInvestigate on campaign expenses at this link.

Over on MediaShift, PhD student Tanja Aitamurto shares the first of five posts detailing some of her research findings in ‘collective intelligence’ in journalism.

Platforms such as Spot.Us and Kickstarter have shown that crowdfunding can work as a financing mechanism for journalism. We will likely see more crowdfunded stories in the future, which means it’s important [to] study how crowdfunding impacts journalism and the role and work of a journalist.

She offers five observations “on how the crowdfunded process impacts journalism from the reporter’s and donor’s point of view”.

This series of 10 moneymaking tips for journalists began on Adam Westbrook’s blog, but continues exclusively on Journalism.co.uk.

Adam’s e-book, Next Generation Journalist: 10 New Ways to Make Money in Journalism is on sale now.

Crowdfunding has made it into my book even though, on the face of it, it is hardly entrepreneurial. It is however a method only possible thanks to the internet; and as you’ll read in the e-book, a method which actually requires some of the toughest entrepreneurial spirit.

The idea of crowdsourcing news stories, opinion and media isn’t that new. But the notion of crowdsourcing money is only beginning to come to fruition. The real pioneers on this have been in cinema: last year the producers of Age of Stupid funded the entire project with donations from the public.

The internet has made it easier too. In particular we’re seeing new platforms from which to launch your crowdfunding project. Spot.Us is one of the first, and currently helps to fund projects with networks in Seattle, San Francisco and Los Angeles. More recently another startup – Kickstarter – has emerged working along similar lines.

But be under no illusions: crowdfunding is not an easy ride.

“You have to tell people what’s in it for them” says multimedia journalist Annabel Symington, “people want to know what their money is going to do, and saying it’s going to fund a piece of quality journalism isn’t enough.”

Along with two partners Annabel has spent the last few months using Kickstarter to raise enough money to report on the Guarani Aquifier. As with almost all of the ideas suggested in Next Generation Journalist: 10 New Ways to Make Money in 2010, crowdfunding it’s about being more than a journalist:

“Through this project I’ve become a brand designer, a social media guru, a public speaker and an event organiser. You name it, I think I’ve done it,” says Annabel.

And that wraps up the 10 new ways to make money in journalism in 2010. If you’ve been inspired by any of them you can find out how to make them happen inside the ebook – on a discount price until 27 May.

What do you do when you’ve got a story no-one wants to buy? When US-based journalist Paige Williams couldn’t sell her magazine story about Dolly Freed, a woman briefly famous for writing a book about frugal-living in 1978, she decided to do what she calls ‘radiohead journalism’ – getting people to contribute whatever amount they chose, as Thom Yorke’s band did with their album, In Rainbows.  The ‘Finding Dolly Freed’ story cost over $2,000 to produce, and in February she reported that 160 people had donated just over $1,500.

[T]he Dolly Freed project became not only an exercise in self-publishing but also an experiment in “Radiohead journalism.” Would readers pay for a story that they could read for free on an independent website by a writer they’d never heard of?