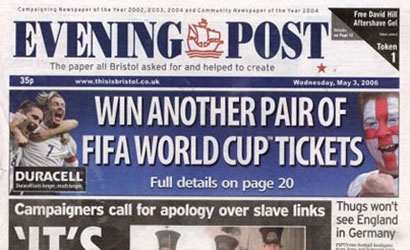 The Bristol branch of the National Union of Journalists is due to hold a peaceful demonstration later today following news that 20 jobs were at risk with publication of the Evening Post’s Saturday edition to be stopped from next month.

The protest will take place outside an exhibition marking 80 years of the Northcliffe Media’s title from 6.15pm outside the Galleries in Bristol. The union branch says it has received much support from the local community.

We call on the paper’s management to take steps to avoid job losses and enter into meaningful consultation with staff and their union representatives.

Proposed job cuts condemned by union, who will meet on Monday.