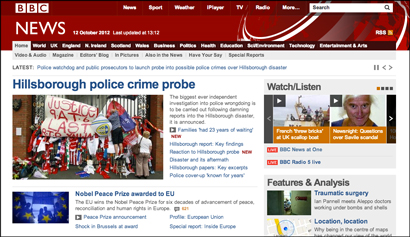 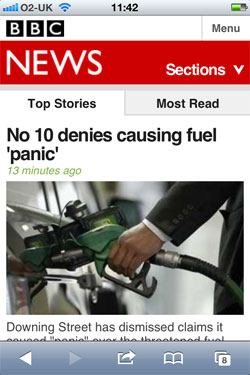 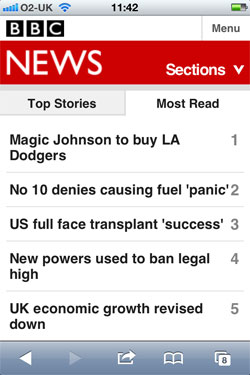 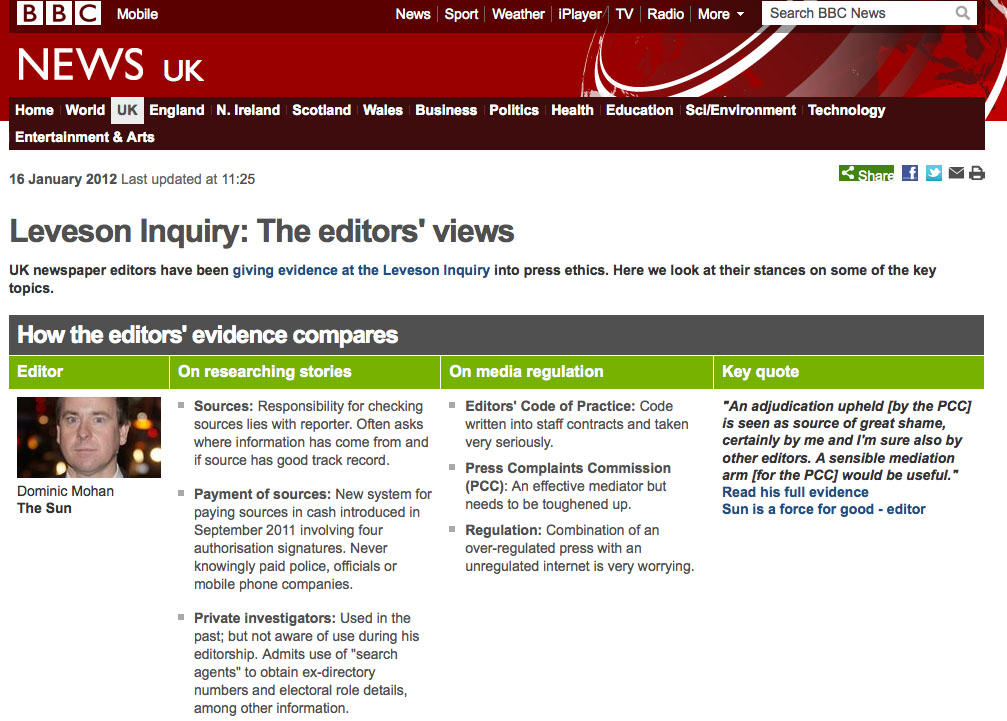 BBC News has compiled a table of views as shared by newspaper editors at the Leveson inquiry, giving readers the opportunity to closely compare the standpoints of each editor on key points.

The table sets out “how the editors’ evidence compares” and includes key points on given by the editors “on researching stories”, “media regulation” and a “key quote”. 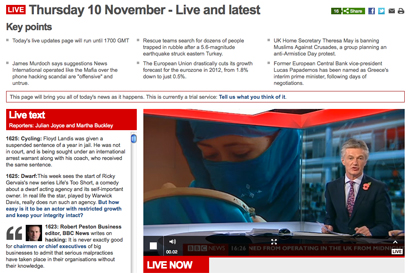 Over on the Editors blog BBC website editor Steve Herrmann discusses how the broadcaster is currently trialling some changes to its use of live pages to develop the format from simply being built around big news stories, to becoming a more regular feature.

The format has been a big success in terms of usage, so we’re thinking about what more we could do with it. We think the pages are not necessarily just about breaking news – they are also a real-time showcase of the best of what we (and others) are doing, so we’ve been wondering whether – and how – we could make this approach work as a regular feature on the site rather than just something we use around big stories. What would it take and how would we need to organise ourselves differently in the newsroom and beyond?

So we’re currently trying some of this out – you can see an example here. This isn’t the first trial we’ve done, and it won’t be the last, and the approach and format may change, because these tests allow us to get valuable insights into how we might develop it, what works and what doesn’t.

Herrmann adds that part of this trial will also look at bringing the BBC’s news and social media output closer together, referring to a recent move by the BBC to reduce its use of automated feeds on its @BBCNews and @BBCWorld twitter accounts.

The BBC News Android app has been updated to accept user-generated content and encourage people to send in their photographs and videos of a news event, something user of the BBC News iPhone app had already been able to do.

The Android app, which has been downloaded more than two million times globally since its launch in May, has also been updated to include the addition of homescreen widgets, improved personalisation and the ability to store the app on the SD card.

Where? Chris is a journalist and social media editor for BBC News

Chris is speaking at our next digital journalism conference, news:rewired – connected journalism, as part of the panel on “Bringing the outside in”, a session looking at newsroom strategy behind integrating third party and user generated content. Traffic from LinkedIn to BBC News has jumped from around 20,000 referrals in January to over 200,000 in June, the BBC has revealed.

“Referrals from LinkedIn have increased rapidly over the past few months, but they’re nowhere near the level of referrals we get from Twitter,” a spokesperson from the BBC told Journalism.co.uk.

The figures suggest the dramatic rise in LinkedIn referrals – from 41,278 in April to 164,869 in May – is due to LinkedIn Today, LinkedIn’s aggregation news site which launched in March.

LinkedIn Today has been attributed by TechCrunch as the reason why LinkedIn is now a more important traffic driver than Twitter for its site. Those stats that have been further debated in an article on TechCrunch this week, which questions LinkedIn as a traffic driver as it is powered by Twitter. “Get rid of the tweet and you get rid of the referral traffic,” the article states.

The LinkedIn share button being added to many news sites also deserves recognition as a traffic driver.

Line graph of Twitter and LinkedIn referrals to BBC News. Click on the visualisation to see exact the figures.

LinkedIn users can also follow particular news sites, such as BBC News, the fourth most popular website in the UK, and the only UK-owned website out of the top four. It is curated by people within that industry based on shares on Twitter and LinkedIn. So a story becomes top story when enough people within the industry retweet and share it.

BBC News may have received a boost from LinkedIn Today but unlike for TechCrunch, which is a great fit for LinkedIn with its mix of technology and business news, the BBC site has a much wider scope. That is perhaps why the stats show that last month Twitter provided five times as many readers to BBC News, with more than one million referrals a month.

There is more on LinkedIn and how journalists can get the most out of the social network in this week’s podcast.

Today the BBC announced the launch of a new product for connected TVs which, according to a release will see BBC News video news clips brought to television via the internet.

This is part of a “value for money” strategy to re-purpose BBC Online products for a wide range of devices. Editorial teams in the BBC’s newsrooms will work to curate clips to complement the 24 news channel and to run alongside text-based news from BBC News Online. And the control of what content the user views will be in their hands, with navigation via the remote.

BBC Worldwide is also said to be launching an international version which will be supported by advertising. In a blog post BBC Online editor Steve Herrmann said in time the product will also be rolled out to other devices in the UK.

Hundreds of journalists joined Saturday’s march against spending cuts, according to the National Union of Journalists, with reporters and citizen journalists out in force to cover the largely peaceful demonstration.

One of those reporters was first year linguistics student Matthew Taylor, who set up a new website and live blog to gather Tweets from student journalists on the ground.

Independent student journalism site Elephant, which launched 12 hours before the march began, recorded 1,000 unique users on the day, with around 75 followers online at any one time.

Taylor, a 20-year-old student at Queen Mary University of London, created the site using ScribbleLive’s live blogging platform. Taylor said he wanted immediacy and accountability for the tweets included in the blog and by using the software he was able to use approve Tweets through a student editor. Armed with an SLR camera, a netbook and phone, Taylor was one of around 15 students reporting for Elephant. The site’s editor, who was also watching out for new information on the UK Uncut blog updated by members of the protest group and rolling news channels, curated and checked tweets for use on Elephant with a delay of “maybe a minute”.

“We were second only to television as the fastest visual report on the day,” Taylor claimed.

He said he is now providing feedback to ScribbleLive as to ways the company can improve the distinction between comments from the public and contributions from journalists in a live blog.