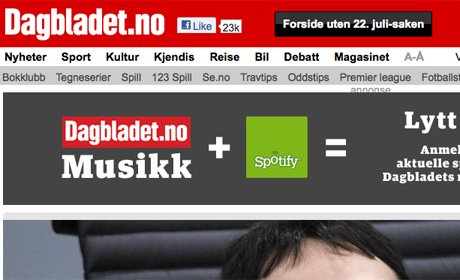 for the week ending Sunday 31 July

Who wrote a lot about…’Famine in Somalia’’

Sign up to the campaign for a public inquiry into phone hacking at hackinginquiry.org
Visit the Media Standards Trust’s new site Churnalism.com – a public service for distinguishing journalism from churnalism
Churnalism.com ‘explore’ page is available for browsing press release sources alongside news outlets
The Media Standards Trust’s unofficial database of PCC complaints is available for browsing at www.complaints.pccwatch.co.uk Daily Mail columnist Melanie Phillips has spoken out after being cited in a manifesto believed to have been written by Norwegian gunman Anders Behring Breivik and sent out shortly before Friday’s attacks.

Phillips is quoted twice by Breivik in the 1,500-page manifesto, which is severely critical of journalists in general and included detailed plans for a possible attack on a journalism conference.

Writing on her blog, she hits back at Liberal Conspiracy blogger Sunny Hundal, who flagged up the references to her in a blog post yesterday. Hundal’s post included a disclaimer stating that “there is no suggestion that his actions were inspired by Melanie Phillips, nor am I making that claim”, but Phillips accuses him of singling her out by only referring to her and Jeremy Clarkson being quoted, and none of the other writers, philosophers and politicians who are also mentioned by Breivik.

Phillips goes on to accuse Hundal of a “crude attempt to smear me by a writer who has long displayed an unhealthy obsession with my work”.

Golly. Is Hundal suggesting that my writing provoked the mass murder of some 93 Norwegians? Doubtless with one eye on the law of libel, he piously avers:

“…there is no suggestion that his actions were inspired by Melanie Phillips, nor am I making that claim”.

Yet apart from a glancing reference to Jeremy Clarkson, whose remark about the flag of St George is also cited in this ‘manifesto’, I am the only person to whom Hundal refers to in this blog post, quoting at some length both my article and Breivik’s comments on it. He therefore gives the impression that I play a major role in this supposed ‘manifesto’, which he describes as warning of the ‘Islamic colonisation of western Europe’.

But in fact, there are only two references to me or my work in its 1,500 pages. Those references are to two articles by me published in the Daily Mail, a mainstream British paper – one on mass fatherlessness in Britain, and the other on the revelation by a former civil servant of a covert Labour government policy of mass immigration into Britain. There is no reference whatever to my writing on Islamisation.

Phillips also accuses the left of “wetting itself in delirium at this apparently heaven-sent opportunity to take down those who fight for life, liberty and western civilisation against those who would destroy it”.

According to her post, she has already received emails from members of the public relating to the manifesto, including one saying “I congratulate you on your part in the Norway massacre”.

Breivik, who has admitted being behind the deaths of more than 70 people in a bomb and shooting attack on Friday but denies criminal responsibility, appeared in court yesterday behind closed doors. Reports suggest that the press were banned from the hearing in part due to a fear that he may attempt to convey coded messages to accomplices.