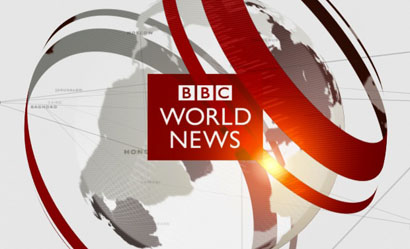 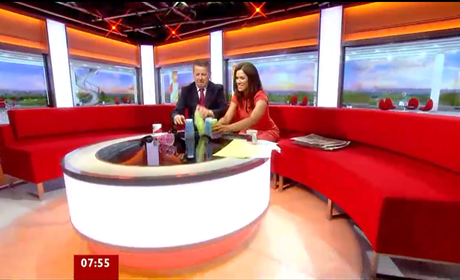 Hello this is Breakfast with Bill Turnbull and Susanna Reid.

BBC Breakfast started this morning’s programme like any other, but it was of course a little different as it was the first to come from the BBC’s new base in Salford.

The launch was fairly understated. Early in the show it was only mentioned as part of the headlines sequence, just before the programme’s main news story but viewers were treated to a new, apparently smaller, studio and a refreshed backdrop featuring the Salford skyline.

Reaction to the programme’s new surroundings were mixed. Some viewers expressed concerns about how close the camera appeared to be to the presenters:

@bbcbreakfast too brash, far far too close, sets look cheap and smallLooks like ITV to be honest. Not a good move at all.

“@BBCBreakfast: Good morning from our new home.” Why so close up? And garish? #itsallabittoomuch

Not a fan of new @BBCBreakfast studio. Zoom out!!

Although BBC colleagues that had already made the move north were happy to see Breakfast in Salford:

Exciting to be able to see @BBCBreakfast off on their Salford journey. Very smooth take off. @billtu and @susannareid100 looking great.

The show’s move is a significant moment for the BBC North project and follows similar moves by BBC Radio 5 Live, CBBC and a Question of Sport. However it has not been without problems.

Less than half of the team made the transition to Salford, including two of the show’s stars Sian Williams and Chris Hollins, both of whom left a few weeks ago.

The show’s long-standing weather presenter Carol Kirkwood has remained, although she’ll present from a studio in London or on location as she has done since 1998.

Technically the programme went off without a hitch, although fans of the show’s Irish dancing business reporter Steph McGovern will have been disappointed as she had to miss the relaunch because of laryngitis. While she wasn’t on air though she spent her time tweeting pictures from behind the scenes:

Inside the gallery – where the @BBCBreakfast team are keeping things running smoothly twitter.com/stephbreakfast…

Her role was taken over by reporter Ben Thompson who travelled from London last night, raising questions of whether the programme’s producers have finished building the show’s full stand-in line up.

It’s also yet to be proven how the show’s move up north will affect the calibre of guests it can pull in for the lighter section of the programme after 8.30am, although with an estimated seven million viewers producers are confident they can still attract the biggest stars.

Speaking to the BBC before the show’s launch deputy editor Adam Bullimore said: “We’ve had some researchers booking guests in advance of the move and the indications are that we will get talent on the sofa.”