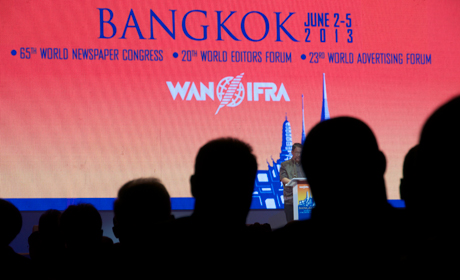 This afternoon I gave a presentation at the World Editors Forum in Bangkok. Here are my slides, notes, and links to further examples and resources.

My name is Sarah Marshall and I am technology editor at Journalism.co.uk, a news site reporting on innovations in the digital news space.

3.
The title of this talk is ‘new wave storytelling’ and I want to talk to you about why we should be ‘thinking outside the box’. So what do I mean by the box?

4.
Take a look at these three news stories – about David Beckham’s retirement. What do you see? Remove the mastheads and they all look the same: picture and text or video and text – each one uses inverted triangle way of telling a news story.

5. Box
Where magazines use powerful images and text to tell stories, the technological limitations of the digital space – and the CMS – mean that stories are generally told in within a box.

6. Open box
More recently we have seen that box opening up, news sites have been moving beyond the article, they have been breaking article boundaries. We are seeing new innovations in web-native storytelling.

It is about a deadly avalanche which claimed the lives of three very experienced skiers.

It is a 17,000 word feature told with the help of videos, moving graphics, picture slideshows, the recordings of 911 calls.

John Branch, the sports reporter who wrote it, won a Pulitzer for the words.

It took six months. John worked alone for one month, and then the second month was working alongside a videographer and photojournalist. His bosses at the New York Times saw the potential to make something extra special.

During the six months while Snow Fall was being worked on, there were some pretty major news stories to cover: the Olympics, Hurricane Sandy and the presidential elections.

8.
And the Snow Fall effect? Six days after publication the story had received 2.9 million visits. Up to 22,000 users visited Snow Fall at any given time. A quarter to a third of the hits were from new visitors to nytimes.com

11. Clock
And the average time on site? 12 minutes. Any of you who check analytics on a daily basis will know that’s a lot.

Now if you have read Snow Fall, you will know that it takes a lot longer than that.

It took me about two or two-and-a-half hours.

So arguably a lot of people just looked at the whizzy graphics and fewer people went on the full journey.

Plenty of digital column inches have been written about Snow Fall. There has been criticism – and there has been praise.

And am I going to spend two-and-a-half hours sitting upright looking at my desktop?

Before we come onto some other examples, let’s think about how well the multimedia presentation works as a storytelling device.

13. Gallery
Have you ever been to an art gallery or museum and not known whether to first look at the art or artefact or read the caption? I was conscious that this might be the case with Snow Fall. Should I read to the end of the next paragraph or play the video now? A decision can be disruptive.

But for me Snow Fall did a pretty good job. In the same way a well-curated museum or gallery will lead the viewer by the hand, Snow Fall too achieved this on the whole.

And design is hugely helpful.

14. Aron Pilhofer
Aron Pilhofer from the New York Times mocked up what Snow Fall would look like if it was presented in the usual format. You can see why design matters.

The New York Times may have received much of the attention, but there are now lots of examples of news sites telling stories out side of the box.

15. Firestorm
Here is how the Guardian launched Guardian Australia last week. This is Firestorm, a multimedia project which provides a seamless and immersive experience.

It’s about a bushfire in Tasmania which destroyed a family’s house. They saved themselves by getting in the water under a jetty.

The Guardian has done a fantastic job here. Remember how I talked about the gallery or museum experience and having to decide where to go next? The Guardian leads the reader through, taking them on the journey.

16. Daft Punk
This example is from music site Pitchfork.

You’ll be starting to see by now that there are some common features of these ‘beyond the article’-type stories. There’s often moving graphics, there is video, attractive typefaces.

18. ESPN
And here we have ESPN. Another common trait is that these multimedia presentations are all long-form, thousands of words, probably because of the investment of time in coding, they’ve chosen in-depth investigations or features.

19. Mobile
All of the examples we have seen so far are how they appear on a desktop. But I said earlier, perhaps the reader wants to lean back with a tablet device or perhaps read on their a mobile.

20. Bat for Lashes
And while this example, again from Pitchfork, works on the desktop…

21. Bat for Lashes tablet
It is more problematic on a tablet, particularly on 3G where it is jumpy.

22. Bat for Lashes mobile
And if you view this story on a mobile, you are delivered a simple, single column story.

Pitchfork’s audience is young and highly mobile. Therefore a proportion of the audience will not be getting the full experience that Pitchfork has invested in.

But I don’t want to be too critical of those innovating in the newsroom.

23. Washington Post
Elsewhere and the Washington Post recently published a multimedia story called The Prophets of Oak Ridge. It has been designed for desktop, tablet and mobile as the site is fully responsive.

24. Advertising
So I know what some of you are thinking. How does this digital stuff – which may take 6 months to build and require designers, developers, photojournalists, videographers, oh and someone to write the tens of thousands of words – pay for itself?

25. Snow Fall
You might have noticed that Snow Fall includes advertising – including advertising a subscription of the New York Times.

Om Malik has argued that it would be better to have Land Rover ads in there or something more topical.

Those of you here who are responsible for the bottom line probably understand why that decision was taken to put ads in.

26. Mark Thompson
But when Mark Thomspon, chief executive of the Times saw Snow Fall he did question the decision.

And of course what the New York Times got was an amazing branding experience.

More than 10,000 people were tweeting, most of them saying how amazing this thing was that the New York Times had created.

So arguably you can keep such a presentation outside the paywall, leave ads out and use it as a branding opportunity to show the news outlet’s potential.

You could of course do it in conjunction with sponsorship. But a ski company or Land Rover? It might jar. After all, Snow Fall was reporting on an accident and three people died.

28. Chicago Tribune
And the Chicago Tribune uses multimedia to entice new subscribers. This one is outside the paywall, but readers are promised more of the same if they sign up and pay.

29. e-books
And the Guardian and New York Times are selling Firestorm and Snowfall as ebooks.

30. New York Times
So, I bet some of you are thinking, “it’s all very well the Grey Lady spending six months on Snow Fall, but they are the New York Times and have the staff and the money”.

It will no doubt get easier and quicker to create such stories which break article boundaries.

Indeed the new Newsweek site – NewsBeast – is said to follow this type of design.

31. Scroll Kit
In fact there are more DIY options already available. This is Scroll Kit, it’s like InDesign for the browser.

You can drag images around, videos and create a multimedia experience with no coding skills.

And I want to leave you with a final thought. What have these three things have in common? A Black and Decker Dustbuster, memory foam, and, this may give it a way slightly, it’s freeze dried ice-cream.

They were all spin-offs or by-products of NASA inventions.

So my final thought for you, and it is actually not my own but one suggested to me by Benji Lanyado, a journalist and freelance creator of such visuals and multimedia products.

His view is that if you spend the time, effort and resources one one project and start thinking beyond the article, you’ll be able to re-use some of the code, you’ll be able to create other such stories more easily and quickly – and there will be other spin-offs for your news outlet.

34.
Thank you. I’m sharing a link here. I’ve put together a list of stories – such as Snow Fall, Firestorm and there’s one from The Verge – which you can explore.