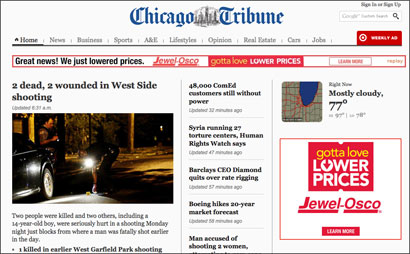 The Chicago Tribune clocked up 22,000 digital signups over the weekend, following the launch of the redesigned website, according to Time Out Chicago’s media blog.

Tribune readers are being asked for their zip code and email address ahead of the title starting to charge for some premium content, including opinions and reviews, reports from the watchdog team and content from The Economist.

More than 22,000 readers had registered their details between 6pm on Thursday and Sunday morning, according to Time Out.

Adee also confirmed that Bloomberg Business News soon would be added as part of the free content on the site. At some point in the future, those who’ve registered will have the option to pay for premium content, including material from the Tribune, the Economist and Forbes.

Details of the paywall plan will be determined by feedback from users, Adee said.

The Tribune’s digital membership page says those who opt to pay will get additional services.

We will be creating new apps, special events and e-books and other features that will be included in your digital membership.