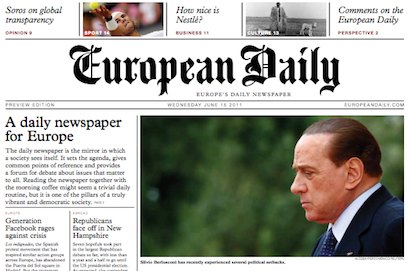 The chief executive of a new daily Europe-wide newspaper due to launch this year says now is a “super exciting time” to set up a publication covering the continent.

The European Daily was born from the belief that European news is still seen “through national lenses” and that this “isolates debate”.

It started as a website featuring mainly aggregated news and is preparing a full-scale launch in print, mobile and online shortly.

Chief executive Johan Malmsten told the News World Summit in Paris: “It’s a project that’s been in the running for five years. As a Swede living in Paris I found there was not a news source that took Europe as the starting point.

This is a super exciting time to be launching a European platform – especially for debate. I think Europe will benefit from a publication which takes Europe as a starting point and explains how events in Greece, for example, have an impact.

State borders no longer prevent us from moving around the continent freely, but they still manage to isolate debates and hold back the free flow of ideas and arguments.

Without common points of reference, Europeans talk past each other. Daily news reporting and analysis demands a European perspective.

For us, that means untangling complex issues and bringing them into a wider context to show how they impact on the everyday life of Europeans, whether they live in Lisbon or Helsinki. We believe that this can be provided by a European daily newspaper.

In the end, what is currently missing is intelligent and independent journalism that gives form to Europe by analysing, debating and criticising issues from a European perspective. Providing this will be our mission, our duty and our privilege.