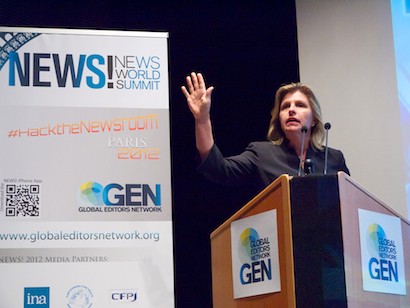 Local online advertising is one of the top opportunities for growth for news publishers this year, according to a new trends report by World Newsmedia Network due to be published in September and previewed at the News World Summit in Paris today.

Local advertising is on the up – it is a great opportunity – but half is coming from pure players like Google, Microsoft, Facebook. Only a quarter is from newspapers, 10 per cent is going to local TV and about 11 per cent directories like Yellow Pages.

We can’t let the pure plays and telecom groups take that money from us. We need to take that opportunity and run with it.

South Korea is the biggest consumer of downloading apps next to US, Sweden, South Africa and Japan.