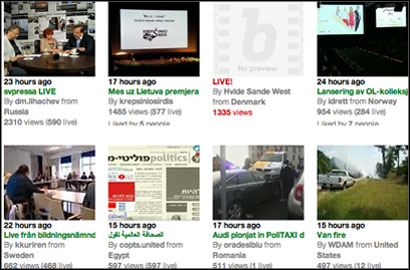 Bambuser, the live-streaming smartphone app, has announced it will be offering its premium service for free to citizen journalists and activists.

Their premium usage tier usually starts at €99 per month and can cost up to €499 per month. The new premium for citizen journalists will offer unlimited hours of streaming, unlimited storage and an ad-free player. There is also an option to allow Associated Press to make footage available to their media outlets.

Posting on their blog, they said:

At Bambuser we truly believe in free speech and democracy. Over the past years we’ve seen more and more activists and citizen journalists use Bambuser to broadcast real-time information about activities and events when they happen. We think that user generated content broadens the overall picture of what’s actually going on, and is needed to complement professional news reporting.

When traditional media has little or no possibilities to have journalists on site, user generated live streams are essential.

Speaking to The Next Web, Bambuser’s executive chairman Hans Eriksson explained the decision:

We don’t believe ads combined with protests, demonstrations and war-like situations are proper. We know ads are also an issue for the broadcaster as he/she wants the cleanest possible video out. To us, these people are important users and if we can help them to a better total experience in what they’re doing we’re very satisfied.

Bambuser has been used heavily by citizen journalists and activists around the world and came to prominence during the Arab Spring last year. Since then it has been used to monitor the parliamentary elections in Egypt and cover the Occupy Wall Street movement. After footage from the violence in Homs was used by broadcasters around the world the Syrian government blocked the service on its 3G mobile networks.

Citizen journalists and activists can apply for the premium account by emailing info@bambuser.com with their username and a brief description of what they do.

Bambuser is a previous Journalism.co.uk app of the week.