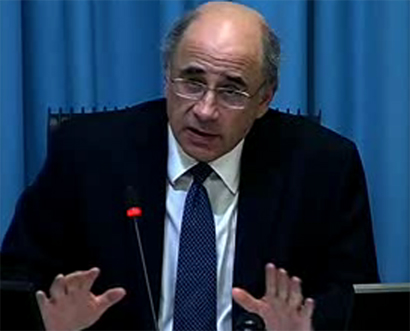 The Press Complaints Commission is looking at the Irish press watchdog system as a possible option for reforming the UK self-regulatory approach, according to reports.

Press Council of Ireland chairman Dáithí O’Ceallaigh is quoted by the Irish Times as saying the chairman of the Press Complaints Commission, Lord Hunt, and other senior PCC officials have visited Dublin for a “lengthy meeting” to look at how the Irish press regulatory system works.

The Press Council is part of a two-tier approach introduced in Ireland in 2008. Complaints are first referred to a separate Press Ombudsman, who tries to deal with them through conciliation.

If a resolution cannot be achieved, the ombudsman can make a ruling based on a code of practice and can refer significant complaints to the 13-strong Press Council, which runs independently of government and media.

The fact that they came here at all, and those discussions, reflect the fact that Leveson himself and a number of the witnesses at the inquiry in Britain have already publicly expressed their interest in the origins, the structure and the functions of the Press Council and the Press Ombudsman in Ireland.

Meanwhile, Lord Justice Leveson gave a strong hint yesterday afternoon about the regulatory structure he could recommend when his report comes out later this year.

He discussed allowing group complaints and introducing a “swift” system for dealing with privacy and libel issues without lawyers. Leveson also suggested that an ombudsman could give guidance on whether a newspaper needs to notify the subject of a story before publication.

It seems to me that it can do lots of different things. I would like to think about a system that provides redress particularly to those who can’t afford to litigate.

At the moment, the PCC doesn’t take group complaints. So, for example – and I had a number of people giving evidence from, for example, the transgender community and other groups, who say, ‘Well, because there’s no name in this, there’s nobody to complain, and therefore there is no mechanism to obtain redress for them.’

Leveson also said there needed to be “some sort of mechanism to resolve disputes. So that can be consensual, the complaint-solving thing, but a mechanism in the absence of consensual resolution”.

I equally understand that there is an argument that in some circumstances requiring prior notification would lead to litigation and would kill the story. So there has to be some way of drawing a line.

One possibility might be to say there is some mechanism within the regulatory regime that allows the press to say: ‘Look, we have this story, we don’t feel we ought to notify the subject of it for these reasons: he’ll destroy the evidence’, or whatever and to get a view.

If either he doesn’t ask or alternatively he does ask and gets the answer: ‘No, we think you ought to notify’, then again, that doesn’t mean he shouldn’t publish, it’s up to him, but then perhaps there should be a potential regime for exemplary damages. I’m just throwing out ideas.

But then I have another mechanism for swift resolution of privacy, small libel-type issues. Not the enormous stuff, perhaps an inquisitorial regime which can be done without lawyers, but some mechanism for members of the public to be able to challenge decisions and get a swift response.

On top of all that, one has to have a mechanism that means that sanctions work. I recognise entirely the parlous financial position of much of the press, but it’s important that sanctions are taken seriously.

When I said to [Jeremy] Paxman that I didn’t want my report to end up on the second shelf of a professor of journalism’s study as yet another failed attempt, his only comment was to say: ‘As high as the second shelf?’