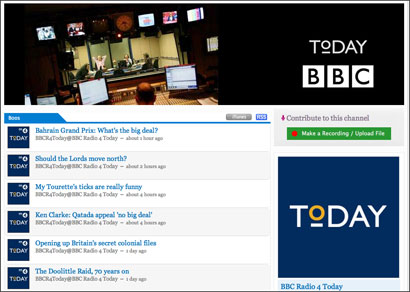 The Financial Times has reported that the BBC has officially partnered with AudioBoo to post sound clips from programmes onto its website.

BBC journalists have been using AudioBoo since shortly after its launch in 2009 and the Radio 4 Today programme has providing catch-up audio for some time, getting around 20,000 listens to the 24 “boos” it posts each week, the FT states.

According to the article, the deal will “result in a series of branded BBC channels using AudioBoo, which the BBC hopes will broaden its audience reach worldwide”.

The decision to back such a small home-grown technology company is also a big step for the BBC, which has until now limited its official media partnerships to larger companies, such as Facebook and Twitter.

After launching in 2009, London-based AudioBoo gathered a loyal following of journalists and well-known personalities such as Stephen Fry who gave the platform an early boost.

AudioBoo founder and CEO Mark Rock told the FT that the BBC deal “took 18 months and 38 meetings to complete, because it was the first time a large media outlet had given official sanction to his business”.