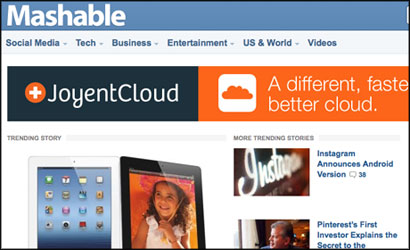 Reuters is reporting that CNN is expected to buy social media and technology site Mashable for more than $200 million (£128 million).

Felix Salmon, a Reuters blogger reporting from the annual South by Southwest technology conference held in Austin, Texas, says in a video posted last night (Sunday) that the broadcaster is expected to make an announcement tomorrow (Tuesday, 13 March).

In the video Salmon states:

Mashable is this huge website, it’s got the same kind of consumer focus that CNN does, it’s not aimed for the tech insiders, it’s aimed at the masses.

Mashable was set up in Scotland by Pete Cashmore who was then 19. It now has bases in New York and San Francisco and has more than 20 million monthly readers, according to the Reuters video.

However, paidContent suggests that a deal is far from being announced and suggests the story based on Salmon’s single, unnamed source is merely rumour.

A source familiar with the situation describes the report of a deal as a rumour and tells paidContent no announcement is scheduled.

Well-known acquisitions of online-only news sites include AOL buying TechCrunch, and its Huffington Post purchase last year on which is spent £195 million.

CNN responded to a request by Journalism.co.uk for comments saying:

We do not engage in speculation about our business and we aren’t commenting on these reports.

Salmon’s video is below: