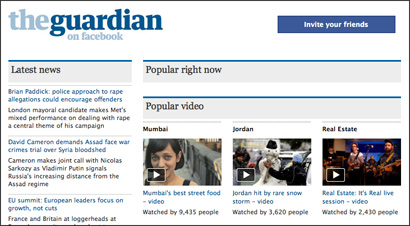 The Guardian has 3.9 million monthly active users, over half of whom are under 25.

Facebook has today published a “spotlight” on the Guardian’s app on its developer blog.

The app has had more than six million installs, suggesting that more than half of those who have opted in use it regularly.

The Guardian’s app, which launched at September’s Facebook f8 conference, encourages “frictionless sharing” and those who opt in to the app to allow their Facebook friends to see what they are reading.

Less than two months after the Guardian’s app was released, the news outlet said the app was delivering an additional one million hits per day.

As well as encouraging younger readers, the Guardian’s app is also giving older content a new lease of life, as Martin Belam, one of those working on the app at the Guardian explains in this blog post.