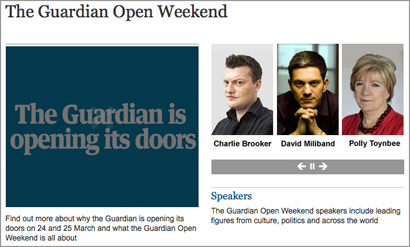 The Guardian has today announced the launch of a two-day festival with more than 300 speakers.

Its Open Weekend will take place on 24 and 25 March and be open to the paying public.

It will cover topics such as the phone-hacking scandal, which will hear from speakers including Guardian investigative journalist Nick Davies and Tom Watson MP.

In a release, the news outlet said speakers presenting at the event at its Kings Cross offices would will include “Guardian editors, writers and columnists will be speakers from all over the world – including Egypt, Pakistan, the US and India”.

The event promises to “bring to life the Guardian’s uniquely open, collaborative and networked approach to publishing on the web, and will be a key moment in the Guardian’s forthcoming brand campaign”.

We pride ourselves on our open and collaborative approach to journalism and what better way to demonstrate this than physically opening our doors to readers? The Guardian is at a pivotal moment in its history and our first-ever Open Weekend will give readers the opportunity to join us on our journey. Our top writers, editors and photographers will be there to speak, discuss and listen, and readers will be able to meet with some of their favourite Guardian faces.